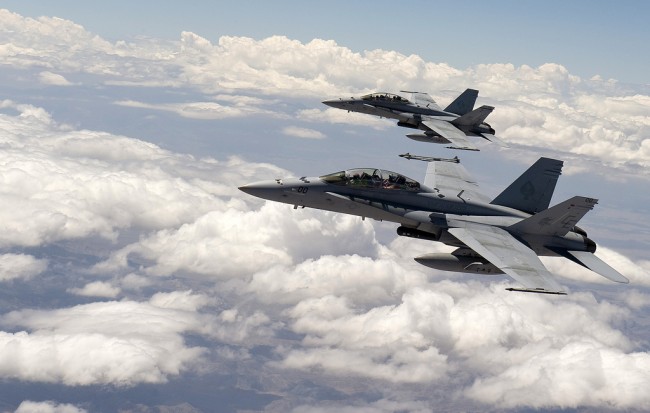 U.S. and coalition fighter jets are finding the town of Kobane in Syria to be a target rich location in the ongoing fight against the Islamic State of Iraq and Levant (ISIL). According to Kurdish fighters on the ground battling ISIL, the air strikes are dislodging the Islamic terrorists from the town. According to a Friday statement from the White House, the battle for control of the Syrian border town was drawing in a large number of ISIL fighters, giving both the coalition ground and air forces the chance to inflict a great deal of damage to the numbers of the terrorist group.

There are concerns, however, that the ongoing fighting may lead to the town falling to ISIL. With vast numbers of the Islamic militant fighters pouring into the city, giving a high number of targets for the coalition forces to target, ISIL could potentially outlast and eventually overpower the coalition ground forces. However, the head of U.S. Central Command Army Gen. Lloyd Austin feels the great number of ISIL fighters shows an upside in the coalition endeavor to stop the terrorist group.

According to Austin, the goal is to defeat and destroy ISIL in Syria, and the manpower the terrorists are flooding into the city is presenting the U.S. led coalition air forces with a target rich environment in the Syrian town. With clusters of ISIL fighters and obvious supply depots, the terrorists are doing nothing but making it easier for large groups of militant fighters and supplies to be targeted and destroyed.

While the area may be loaded with targets, military officials did warn that the large number of ISIL targets will not speed up the overall campaign. Austin indicated that there will be occasional setbacks during the ongoing battle against ISIL. Part of that is due to the number of forces that are part of the coalition. Some ground forces, specifically from the area, have been under years of poor military leadership and are learning from established coalition forces as the conflict goes on. Austin admitted, while the air forces are finding numerous target rich areas on the ground, the town of Kobane may still fall to ISIL.

The consistent barrage of ISIL each day from coalition air forces is only a start of a campaign that could take years to complete. The destruction of ISIL will require more than just a continual bombardment to win. As the action continues, the call for more boots on the ground from U.S. military advisors may be called for. Eventually, U.S. troops may be called in if deemed to be the only way to finally end ISIL and the jihad from the Islamic militants.

Away from Kobane, Austin indicated that there is no perceived imminent threat to the Iraqi city of Baghdad. U.S. Apache helicopters in the area have been keeping a close watch on the Islamic State attempts to move into the Iraqi capital.

The numbers released Thursday showed that the U.S. had launched nearly 500 air strikes against ISIL with 200 strikes in Syria and 300 in Iraq. Allies have added fewer than 100 air strikes. The number of targets is much higher than the numbers of sorties indicate. Many of the airstrike’s launch multiple munitions at a single time, striking multiple targets with one strike. The total number of munitions launched against ISIL by the U.S. and coalition air forces is nearly 1,400. Those numbers are expected to rise and the Syrian town of Kobane continues to offer such a target rich environment for the U.S. coalition air strikes.