The Walking Dead Strangers: Bob and Food for Thought 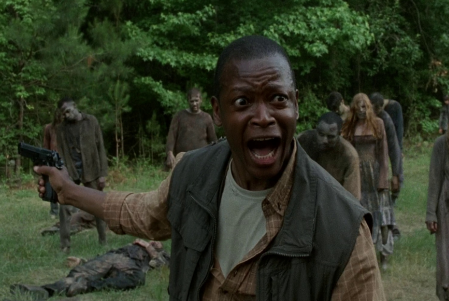 After watching The Walking Dead: Strangers episode last night and then re-watching, as it was recorded on DVR, there was something about Bob and the one-sided conversation he was having with Gareth that provided something more than chills as the Terminus survivors nibbled on Stookey’s leg, pardon the pun, but the whole interaction provided a bit of food for thought. Of course there were many questions that needed answering by the end of this episode of The Walking Dead.

Where was Morgan, being the biggest and most urgent since he turned up last week at the very tail end of No Sanctuary looking pretty cool unlike the last time viewers saw the man in The Walking Dead. In true TWD fashion, Morgan was not alluded to once in last night’s episode. Other mysteries, over and above the one dealing with Father Gabriel Stokes and just how much his character in the TV show will be like the one in the comics, still remain unsolved.

For instance, who was in that kidnap car, the one that Daryl saw speeding off when Beth went missing outside the funeral home and the same one that Dixon spied speeding away in Strangers. Looking back at the Beth kidnap episode from last season that particular scenario felt like a precursor to the whole Gabriel set up last night. Of course the inclusion of the cowardly man of the cloth from the comic books does feel like Scott Gimple and co are leaving the door wide open for more characters from The Walking Dead comic verse to make the transition from page to screen. Negan, the Saviours, the Hunters, et al could all be showing up over the remainder of season five. Before even thinking about introducing characters, however, one should take the time to look at Bob Stookey after the interaction between the now one legged man and Gareth, a little chat that should have given viewers a little food for thought.

Just look at how Bob was taken. Why was the man standing with his head pressed into a tree, one with an odd sign carved into its bark, and crying? Why was he not inside spending time with Sasha and clamoring for more kisses? What was he so upset about? Are the clues in the little talk he has with Gareth? When Stookey wakes up, the Terminus leader is telling Bob about how they evolved into cannibals and then devolved into hunters. He also references a previous conversation that he presumably had with the man where he told him “You can’t go back, Bob.” This implies that Gareth knew Bob before.

Not just before as in Lucy, Glenn, Eugene, Abraham, et al being captured before, but sometime in the past before Stookey became a part of Rick’s survivors. While that is certainly a lot of “befores” to take into consideration, think about this…Gareth says, with not a little personal satisfaction, that, “Yeah, it was you who put us into this situation,” and it is almost “cosmic justice,” as he puts it, that it was Bob that got knocked in the head and had his leg eaten.

Not being overly familiar with Bob Stookey’s character in comic verse of The Walking Dead, it sounds like, in Strangers, the man was a member of Terminus before and that while Gareth and his little group of cannibal survivors are using Bob’s leg for food, the thought does come up about what would have happened if Carol had not started the ball rolling for escape. The very personal nature of Gareth’s talk with Stookey, he knows his name for starters, and the gibe about tasting much better than “we thought you would,” implies a personal relationship of sorts. In The Walking Dead TV version, it definitely seems like Bob, Gareth and Terminus have history together. How the rest of the group will take this news remains to be seen and Rick’s survivors in the show may not be too over eager to save Stookey’s “bacon” in The Walking Dead if that is the case.

27 Responses to "The Walking Dead Strangers: Bob and Food for Thought"