Weezer and Their Triumphant Return to Music [Review]

On Tuesday, Weezer released their triumphant return to music, their ninth studio album titled Everything Will Be Alright in the End. The record marks a critical shift back towards the band’s original sound after their less successful offerings of the past decade: albums like 2010’s Hurley. Since the band’s release of the single Back to the Shack earlier this year, a massive amount of hype has accumulated around the band as a result of their sound resembling a roots revival of their glory days.

One of the issues that fans and critics had with albums like Hurley was that the sound was too processed, as if Weezer had “sold out” to their record label and were now producing radio-friendly singles with little substance. This opinion certainly was not helped when Weezer aided Jackass 3 by providing the theme song, a Hurley track called Memories. In recent years Weezer has had issues delivering to both sides of their fan base: those who remember the Blue Album being their strongest outing, and those who believe Pinkerton was actually the pinnacle of Weezer. The albums resemble a great artistic divide between the smoother sounds of the Blue Album and the grittier, more experimental, angst of Pinkerton. Hurley planted itself too far into the former record’s territory, alienating some fans who wanted a darker, louder sound.

With Everything Will Be Alright in the End, both sets of fans can put down their weapons. The record is an exceptional blend of all of the best sounds of Weezer over the past twenty years. Rivers Cuomo, the frontman and songwriter of the band, shines especially on the record, his songwriting as tactful and witty as ever and his vocals as strong as they were when we fell in love with the four nerdy kids from California in 1994. 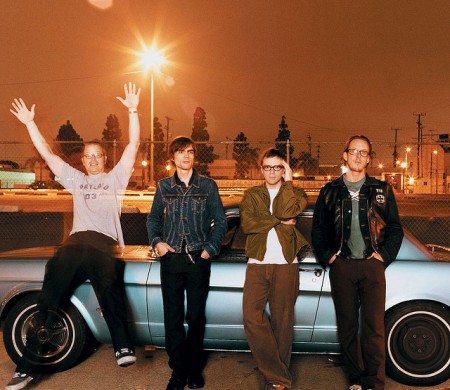 Cuomo’s songwriting centralizes around a few main themes on the record: father issues, girls, returning to the roots of Weezer, and paying homage to the past. Over the course of the forty minute record, he is able to touch on all topics extensively. All of the songs sound a bit like anthems, actually, as if the album is a declaration of sorts. Back to the Shack declares that Cuomo wants to return to their roots, strapping back on his Fender strat and “rocking out like it’s ‘94.” Eulogy for a Rock Band centralizes itself around paying homage to inspirational bands who have come and gone as Weezer decides to continue to run with the torch rather than fading away. The British Are Coming lands itself in a similar vein, tributing the British Invasion and its impact on rock and roll, but also while making a stand against it as Cuomo wants to take things in his own hands rather than roll over to the red coats.

As Cuomo remarks in Back to the Shack, he has had time to mend a bitter relationship with his father during the space between these albums. That may very well have inspired Foolish Father. Even though the song is a plea to a daughter to not cut her father out of her life, it seems a bit like Cuomo acting as the intermediary he may not have had in the severing of a similar relationship.

In Weezer’s triumphant return to music, Everything Will Be Alright in the End cannot be complete without a few awkward love songs that remind of us Pink Triangle and El Scorcho. Don’t worry, Rivers Cuomo is more than happy to oblige. Go Away is a fantastic little tune about the end of a relationship where the boy is begging for a second chance from the girl. All she wants from him is his absence… right now. He bounces off of Best Coast singer Bethany Cosentino as she angrily pushes him out of her life. Then Cuomo leaves the desperate space of Go Away for the electrifying Cleopatra, where he comes to the conclusion that he wants her out of his life as well.

The musicality of the record is remarkable. The band has chosen to work with producer Ric Ocasek of the Cars, who is the same producer who worked on the Blue Album. In addition to Cuomo’s vocals being as powerful as ever, the entire band isn’t phoning it in anymore, which may be how Hurley sounded to many. The electric guitar solos on Everything Will Be Alright in the End are the strongest Weezer solos ever, with cascading riffs in songs like Cleopatra causing the soundscape of the record to unravel into organized chaos. The synths on the record are top-notch as well, and every musical performance is the perfect mix of gritty, angst-filled rock and California surf tunes. Again, Blue Album fans and Pinkerton diehards can finally sit in the same room together.

The weakest point of the record is debatable, because while Cuomo commits one of the cardinal sins of songwriting, it works so well that it is hard to blame him for it. Da Vinci, one of the catchiest songs on the record, is riddled with modernized technological references. This tends to be a songwriting dilemma because once the writer does this, they run the risk of dating their song. What happens when a writer mentions Facebook in their song and ten years later it is nonexistent? Cuomo seems to ignore that unspoken rule entirely, mentioning both Rosetta Stone and Ancestry. This may be the first time the Ancestry website has made its way into a rock song, but that is alright because it actually does work. Cuomo’s writing is so innocent, yet incredibly intellectual and endearing that the quirky modern references do not take away from the experience as they typically would in any other scenario.

Everything Will Be Alright in the End is a triumphant return to music for Weezer. Their four-year absence can be easily forgiven by fans given the album is one that is worth waiting four years for. Move over Pinkerton and the Blue Album, there may be another album in the running down the road when fans and critics alike take stock of the Weezer legacy.

One Response to "Weezer and Their Triumphant Return to Music [Review]"