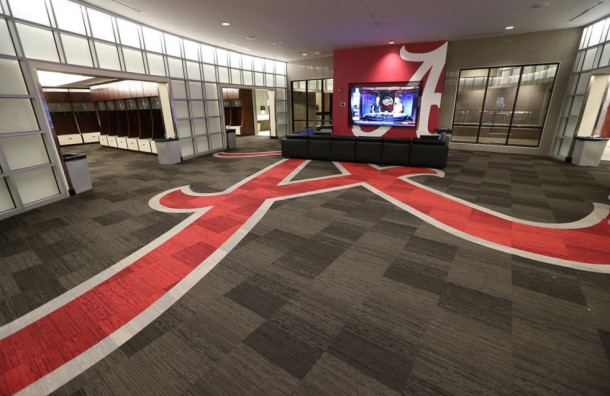 Following their 25-20 win over Mississippi State, Alabama is No. 1 in the College Football Playoff rankings The Crimson Tide leapfrogged Oregon, Florida State, and TCU despite being behind each team a week ago. Selection committee chairman Jeff Long called Alabama “the most complete team right now.”

Long’s statement is up for debate, but what is true now is that Alabama controls its own destiny to make the inaugural College Football Playoffs. The Tide sits at 9-1 with games against undermanned Western Carolina of the Football Championship subdivision and in-state rival Auburn, a team that has lost the last two games. It’s arguably the worst nightmare scenario for non-SEC teams looking outside of the top four in the CFB Playoffs rankings.

Oregon remained at No. 2 from a week ago. Meanwhile Florida State, who is the defending national champions and the lone undefeated team out of the Power 5, stayed at No. 3. Mississippi State remained in the top four despite the loss to Alabama. That leaves TCU, Ohio State, and Baylor looking in from the outside. There are many possibilities and scenarios that may play out as the college football season winds down. Mississippi State’s quality wins diminished with Auburn and LSU losing the past week. The Bulldogs now have one win over teams currently ranked in the Top 25. They will face No. 8 Ole Miss in two weeks, so that should bolster their resume a bit. A win by the Bulldogs along with Alabama sitting in the driver’s sit at No. 1 in the rankings, the SEC has a good chance of getting two teams in the College Football Playoffs.

Meanwhile, the committee continues to punish Baylor for its weak non-conference schedule, ranking them seventh – two spots behind TCU, who Baylor defeated back on Oct. 12. Baylor. How did the Bears not leap TCU in the rankings after TCU struggled against lowly Kansas? The Horned Frogs trailed the Jayhawks by as many as 10 in the third quarter before mounting a comeback for the 34-30 win. Currently TCU is in first place of the Big 1, but Baylor controls its own destiny. If the Bears win their final three games they will win the Big 12 title, which will make it interesting to see how the selection committee handles ranking the two, especially if a spot opens up in the College Football Playoffs.

It appears Ohio State is the odd man out, despite still having two games and a possible Big Ten Championship Game remaining. It will be hard for the Buckeyes to leap Mississippi State or TCU and Baylor for that matter in the rankings because Ohio State has no quality opponents remaining on their schedule – a byproduct of a weakened Big Ten.

While there is heavy discussion of who should be No. 4, there may be equal debate about how Alabama is No. 1 in the College Football Playoffs rankings? There is no denying the Tide should be one of the top four teams, but how did they jump over both Oregon and Florida State for No. 1? The Ducks arguably have been the most impressive team in the nation the past six weeks. Florida State is still undefeated and the defending national champions. Alabama just survived an ugly contest with LSU, who is no longer among the Top 25. Remember when the BCS was a headache? Of course there is still a lot of football remaining in the next three weeks.