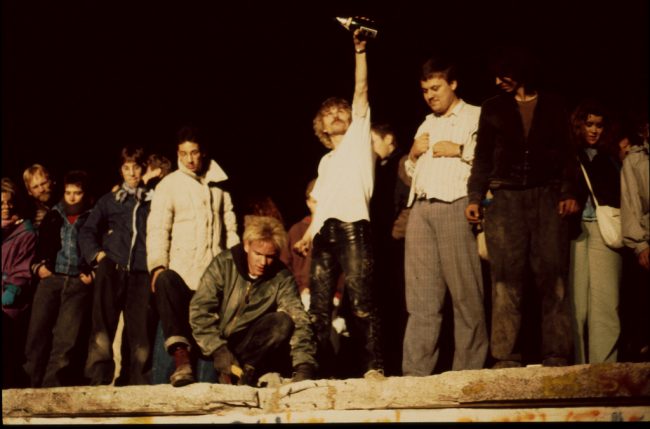 Berlin is set to remember another chapter of its fascinating history as it gets set to celebrate 25 years since the fall of the Berlin Wall. There have been many walls built throughout history that have achieved a certain level of fame, including the Great Wall of China and Hadrian’s Wall in Britain. However, the Berlin Wall, which only lasted for 28 years, arguably became the most infamous, serving as the most recognizable symbol of the Cold War that dominated the second half of the 20th century. The Berlin Wall separated a city which itself has arguably been the most iconic city in terms of world news events since the beginning of the 20th century right to the present.

Berlin was the capital of the German Empire as it rose in power late in the 19th century and into the next century. It remained the political capital during the interwar years, when Germany was on its knees economically and politically. It was in Berlin that Hitler and his Nazis celebrated their ascension to power, and Berlin was the center of the Nazi empire until the end, when it lay in rubble. Berlin, like Germany itself, was then divided into sectors, with the Western sectors being right in the heart of that part of Germany that was held by the Soviet Union. Eventually, the wall itself was built by the communists on August 13, 1961, literally overnight, after more than three million East Germans fled to the west between 1945 and 1961, most of them through Berlin itself. That constituted almost a fifth of East Germany’s total population, and most of the people who fled were young and well-educated, and would have helped to strengthen East Germany.

The Berlin Wall went up in 1961, but not without controversy. The construction of the wall, which literally began overnight, made headlines around the world. President John F. Kennedy visited the suddenly physically divided city and gave his famous “Ich bin ein Berliner” speech in 1963. Closer to the other end of the Cold War, President Reagan would also visit Berlin in 1987, demanding that Gorbachev “tear down this wall.” In West Berlin mayor Willy Brandt, who would go on to become chancellor of Germany, dubbed it The Wall of Shame.

However, not everyone disliked the wall. In East Germany, the wall was called the Anti-Fascist Protective Rampart, with the stated aim of preventing enemies from entering East Berlin. Still, thousands of West Berliners were allowed to cross into the east everyday, often to buy consumer goods that were far less expensive than what they were offered for in the west. The Wall was more effective in keeping easterners in, then keeping westerners out.

In the first two years following the erection of the wall, more than 1,300 East German guards managed to escape to the west, before border security was tightened even more. A number of other people tried to escape from east to west during the time that the wall existed, but quite a few of these attempts resulted in death. The first fatal attempt came just days after the wall went up, as Gunter Liftin became the first victim trying to escape to the west. The last attempt resulting in death came less than a year before the wall came down, when a man built a self-made balloon that came crashing down, killing him. In all, 136 people were killed trying to escape from the east to the west during the time that the Berlin Wall stood.

Before the wall itself came down, the effectiveness of it had already been compromised. Soviet premier Gorbachev had already promised not to intervene in eastern Europe if change came. Hungary opened its borders with Austria earlier in 1989, and many East Germans succeeded in making their escape to the west in this way. Despite attempts by the East German government to block this momentum with tighter legal restrictions, it was already too late. A spokesman for East Germany, Günter Schabowski, announced on the evening of November 9, 1989 that travel restrictions would be eased, effective immediately. The East German government would try to renege on this later in the evening, but it was already too late, as tens of thousands from both east and west flocked to the walls. Border guards on both sides tried to maintain control, but the sheer numbers of people were overwhelming, and eventually, all of the gates were simply opened. Troops at the Wall were on full alert, but no one ever gave an order to shoot. In fact, some of the troops joined those civilians gathered at the Wall. Only hours later, some people began to arrive with hammers and chisels to literally tear parts of the Wall down, and to take pieces as souvenirs of the monumentous occasion.

East German lieutenant colonel Harald Jaeger recalled feelings of desperation on that night, prior to his now historic order to open the Wall at his station at the Bornholmer Street crossing and allow a peaceful mass migration from east to west. He had been demanding something, any instructions really, from his superiors for hours as tens of thousands of protesters had flocked to his border crossing and demanded that it be opened. But the troops under his command had remained silent and done nothing. Jaeger eventually got tired of being laughed at and being told by his commanders that he would have to figure things out for himself. That was when he made the decision to open the wall up, which he did at 11:30 pm that evening. He recalled crying from a combination of strong emotions, as thousands of East Berliners walked past him into West Berlin. He had long believed in communism, but his frustration at his superiors had been extremely frustrating. He had felt abandoned by the Communist Party, as well as by his own military commanders. Also, however, he was just very happy that the situation had not ended in violence. Many historians now cite this as the decisive moment when the Berlin Wall effectively came to an end, and symbolically marked the beginning of the end of the Cold War in general.

When the wall came down in November of 1989, Berlin found itself once again at the center of headlines around the world. Many of the headlines before that had marked bad news. This time, however, there were mostly positive connotations associated with the event. The Berlin Wall falling was symbolic of the easing, and eventual end, of the Cold War itself. The city had remained the capital of East Germany after the war. Shortly after reunification, a newly united Berlin once again became the capital of a reunified Germany. It has remained the capital as Germany recovered from the very steep price of unification to become the dominant power in the European Union.

Now, as the city of Berlin remembers this most interesting and unique chapter of a fascinating overall history of the city 25 years after the fall of the Wall, it is interesting to note that very little of the actual Wall remains standing today. One piece that still stands has become one of the biggest street art exhibits in the world. There is also a line of cobblestone through much of the city to mark where the Wall once stood, although even that has given way to new construction in the last quarter century. Much of what remains of the Wall is spread around the world. Many pieces of it have become souvenirs, while larger parts of the wall can be found in such faraway places as Las Vegas, London, Brussels, Paris, Madrid, Moscow, Mexico City, Buenos Aires, Cape Town, Guatemala City, and Seoul, South Korea. There are also parts of the wall on public display in Canberra, Australia, Kingston, Jamaica, and Haifa, Israel, among other places. The longest stretch of the Wall outside of Berlin itself is in Los Angeles.

Tomorrow, the city will celebrate a quarter of a century since the day that Berliners, of their own accord, climbed on top of the wall and hammered away at it with sledge hammers and chisels. The fall of the Berlin Wall marked the beginning of a highly visible revolution all across eastern Europe, which broke away from the Soviet sphere of influence. Berlin will celebrate in low key style, with very few world leaders having been invited to participate in ceremonies marking the occasion. Instead, the celebrations will perhaps fittingly be more for the people than for leaders, much as it was when the Wall actually fell. There are 8,000 illuminated balloons lining 10 kilometers of the original areas where the Wall once stood, an idea by the Bauder brothers, two German artists. Tomorrow, these balloons will all be released simultaneously, symbolizing the liberation of East Germans. Fittingly, all residents of the city, and indeed of Germany as a whole, will use the occasion to remember such a fascinating history in marking 25 years after the fall of Berlin Wall.