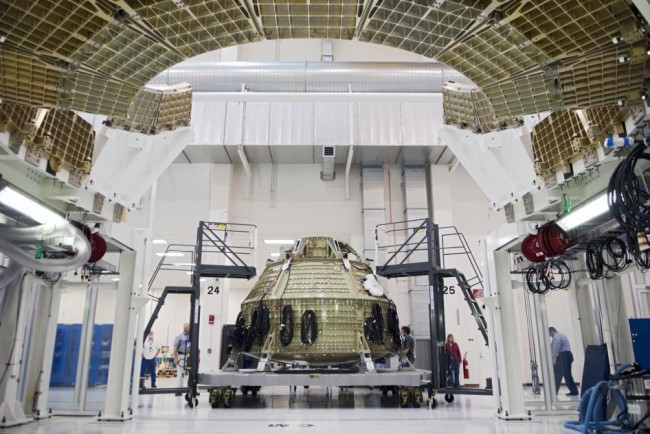 Finishing touches to NASA’s revolutionary spaceship called Orion were completed on Oct. 30. Orion is the first space vehicle designed with the specific purpose of sending humans into deep space. The first destination is expected to be Mars, with the first test flight scheduled for Dec. 4.

Currently housed in Kennedy’s Launch Abort System Facility, Orion will begin its journey to the launch pad on Nov. 10. The spacecraft consists of a crew module, a service compartment and an adapter and abort system. Once at the launch pad, it will be placed onto a United Launch Alliance Delta IV Heavy rocket to be used for its unmanned test flight.

Orion’s 4.5-hour maiden voyage, identified as Exploration Flight Test-1, will take it to an altitude of 3,600 miles where it will complete two orbits around the planet. NASA will use the data from the flight to ensure the spacecraft’s systems are functioning properly and will meet the stresses of travels into deep space. Before its return, Orion will travel further than any manned vehicle in the last 40 years. On its re-entry, the spacecraft is expected to endure temperatures of 4,000 degrees Fahrenheit while attaining speeds approaching 20,000 mph.

Orion will launch from the Kennedy Space center at Cape Canaveral. Shortly, six minutes after take-off, protective panels will be jettisoned as the spaceship separates from the launch abort system. After the first orbit is complete, Orion’s upper stage will ignite, sending the craft to its 3,600-mile altitude, where it will complete its second journey around the globe.

About 3.5 hours into the mission the service and upper stage modules will separate from the crew module as it prepares to return to Earth. About a half hour later the crew module will operate a burn to correctly position itself for re-entry. A little over four hours into the mission, the crew module will re-enter Earth’s atmosphere at 20,000 mph while absorbing 4,000 degrees on its heat shield. Friction will slow the descent of Orion and the craft will deploy parachutes while still traveling around 300 mph. The chutes will slow the module for splashdown off the coast of Baja California about 4.5 hours after it’s launch. The U.S. Navy will be on hand to recover the crew module.

Bill Hill, an administrator for Exploration Systems Development, states that this is the initial mission of many that will exceed low earth orbits that will ultimately send astronauts “to where no man has gone before.” That place includes a journey to the planet Mars.

NASA has major exploratory plans for Orion, but astronauts are not scheduled for future missions until 2020. A Mars mission will not be possible for another 10 years. On average, Mars is 140 million miles away, and many trials and careful planning is still required to ensure the crew’s safety and success of the long journey to the red planet.

In the future, NASA will utilize a new rocket launch system, Space Launch System (SLS), to carry Orion and, eventually, astronauts into space. The first test flight for SLS is currently scheduled for sometime in 2018. That flight will include an orbit around the moon. SLS is specifically designed for astronauts to visit asteroids and, eventually, Mars.

3 Responses to "NASA Tests Orion for Trip to Mars"