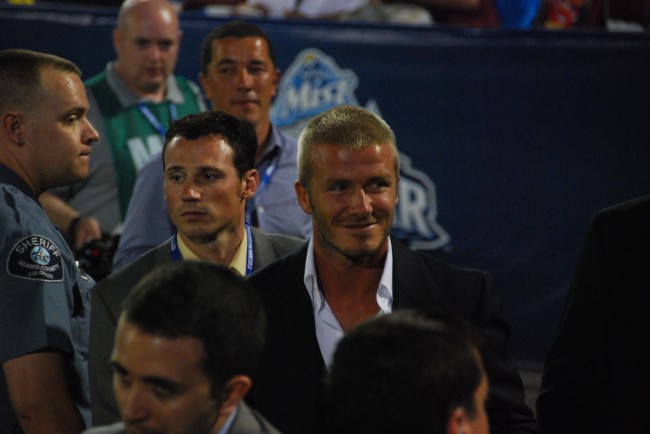 David Beckham and his son Brooklyn were involved in a car crash on Saturday morning in their native country of England. At the time of the accident, Beckham was picking up his oldest son with his wife Victoria from a soccer match when the two were involved in the two car collision. Brooklyn is the oldest of the couple’s four children at 15. Although both men are said to have walked away from the accident uninjured, a source close to the sports star told People Magazine that the two are both shaken up by the incident.

The accident occurred after the retired soccer star and England captain had picked up Brooklyn from Arsenal’s training ground where he practices with the under 16 team. Although the cause of the crash has not yet been released, the Audi that Beckham was driving was reportedly struck by another vehicle that witnesses described as approaching at a considerable speed. Based on reports the force of the collision caused the airbags in the Audi to be deployed and most of the damage from the crash is said to be located on the driver’s side of the vehicle. The deployment of the airbags is said to have prevented the two from sustaining potential injuries. The people in the other vehicle are also said to be unharmed.

The accident on Saturday is not the first time that Beckham has been involved in a car accident. In fact this is the third time alone that Beckham and his son Brooklyn have been involved in a car crash together. In 2011, the two were involved in a crash in Los Angeles on the 405 freeway, which is considered to be one of the busiest highways in the United States. Then again in 2013, the two men were involved in a wreck that occurred in front of their Beverly Hills home. Just this past August, Beckham was in a motorcycle accident on the Sunset Strip in Los Angeles, not far from the family’s home in the states. In all of these instances, there have been no injuries reported.

A bystander who witnessed the crash on Saturday, Tweeted about the accident and said that it appeared as if the elder Beckham had perhaps hurt his shoulder during the collision. After the crash one of the Brighton players who had just left the match against Arsenal, Tweeted that he had seen Beckham and not only did it appear that he had been in a crash but also appeared hurt. Another one of the Brighton player’s also took to Twitter to say that not only was it weird to play against Brooklyn during the match, but after witnessing the accident said it was weird to be behind the Beckham’s during the accident.

Although there are no further details forthcoming about Beckham and his son’s car crash, all parties involved are said to be unhurt and were able to walk away from the accident. No information has been released about the other vehicle and its passengers beyond the fact that they also appeared to be uninjured after the collision.