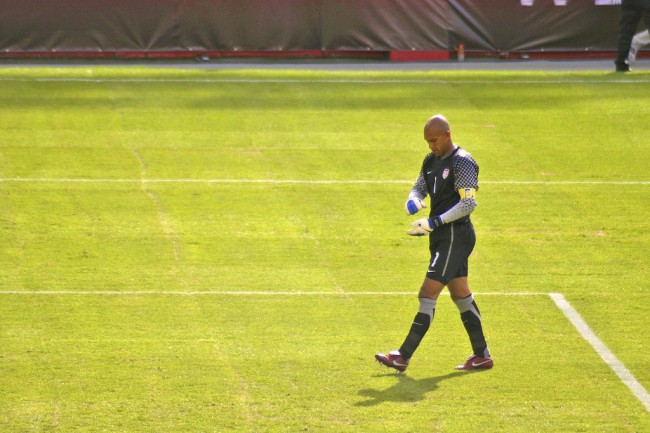 After the 2014 World Cup, all eyes are on Everton goalkeeper Tim Howard, including David Beckham. The USMNT goalkeeper had a stellar performance in the summer tournament and became a star all over the globe. The thought is that he could be Beckham’s first signing for his Miami MLS team.

If Beckham could sign Howard, it would bring home one of the most notable stars from the USA’s World Cup roster. The new MLS franchise is moving forward with plans to set up in Florida, and Beckham has made it clear that Howard is who he wants to lead the new team.

Over the years, Howard has watched the MLS grow greatly. After the success the USMNT had in Brazil, interest has grown in the U.S. about the game and Howard feels MLS can grow even more if they allow for more designated player berths per team.

With Beckham interested in the number one player for Everton, the Toffees are getting ready for a potential bidding war for the 35-year-old goalkeeper. Howard has played in Europe for over a decade with Everton and Manchester United as well as his time with the USMNT. His performance in Brazil has increased his value greatly and will bring a high dollar.

Beckham bringing Howard to MLS could be huge for USA Soccer. The recent growth of MLS has seen superstar players such as Michael Bradley and Clint Dempsey return home to play. The draw of European premier league players to the young United States league has improved the quality of play, but not to the level needed yet.

Jurgen Klinsman, the USMNT head coach, stated that Europe offers a higher quality of play than the MLS, and US players have a better opportunity to keep themselves sharp and ready for the 2018 World Cup campaign by playing overseas. However, if the MLS would open up the designated player slots for all the teams, higher quality play could be just around the corner. Beckham and Howard could instigate a change to that thinking in the North American league.

It is not clear if, or when, the MLS will add to the existing designated player slots to allow for more top quality talent like Howard to join MLS clubs to play and improve the quality of the league to that of one of their European counterparts. However, Beckham does appear to be eyeing Howard and will do what it takes to have the goalkeeper lead his squad when they first take the pitch as the newest MLS team. Howard coming back to the U.S. to play soccer may also entice more european players to try soccer over football.