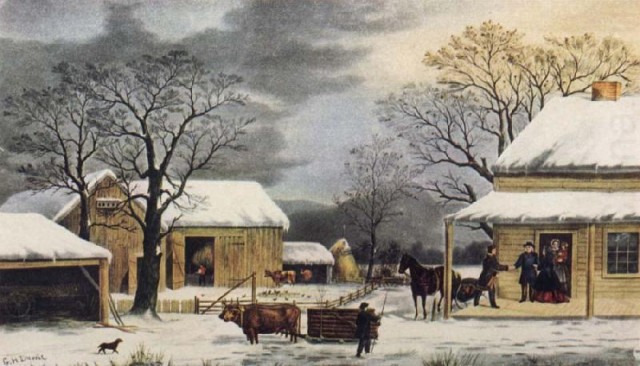 The Currier and Ives print, Home to Thanksgiving, is a 19th-century scene set in rural New England. Snow rests on the ground and rooftops, as the family stands on the porch while greeting their guests. The dog in the yard is curious about the newcomers and the young lad driving a team of oxen stops long enough to look at the activity on the porch. This idyllic picture of a family gathering, Home to Thanksgiving, was published as a print in 1867, two years after the end of the Civil War, when the security of home and family took precedence over war.

The picture was originally a painting by George H. Durrie. Born in 1820 in New Haven, CT, he was a descendant on his mother’s side of William Bradford, one of the Mayflower passengers who became governor of Plymouth Colony. Durrie started out as a portrait painter but he switched to countryside and village scenes around New Haven. He and his wife, the daughter of a choirmaster, lived in a large house he built in New Haven and enjoyed the kind of life depicted in his paintings of family, home and church.

His paintings were realistic, reminding New Englanders of their childhood and life on a farm in a romanticized way. Each scene was a self-contained story that evoked pleasant memories and was easily understood by the viewer. He was a successful artist though not as well-known as some of his contemporaries. His first exhibit at the National Academy of Design in New York was in 1845. That same year, newspapers ran advertisements for his “snow pictures” and he had more paintings of winter scenes than of any other season. The family gathering in Home to Thanksgiving was created in 1861, two years before his death.

Durrie’s winter pictures captured the attention of the New York printmakers, Currier and Ives. Nathaniel Currier started out as an apprentice with William and John Pendleton of Boston, two brothers who started their company in 1824 which made it the first lithographic company in America. John Pendleton expanded the business to Philadelphia then on to New York. He sold the New York City shop to Nathaniel Currier in 1834. Within one year, the printer established the style of print that would make the company famous. Financial success arrived in 1840 with the help of New York City’s largest newspaper, the New York Sun. Currier printed a broadside with a lithographic image of the sinking of the Lexington. It was so popular that the presses printed it for months.

The company did not become known as Currier and Ives until 1857. James Merritt Ives was hired in 1852 as Currier’s bookkeeper but quickly used his knowledge of art and his communication skills to convey to artists what the public wanted. Currier promoted him to full partner in 1857. The company produced numerous prints from paintings by landscape artists. Currier and Ives employed hundreds of people whose skills ranged from grinding stones, printing, adding colors, selling, advertising, as well as negotiating with the artists themselves for their paintings. The company permanently closed in 1907 but Currier and Ives prints are reproduced year after year for calendars, Christmas cards, Thanksgiving cards, and other occasions. There are more than 7,500 different titles of Currier and Ives prints on record compiled lists by the American Historical Print Collectors Society.

Durrie died in 1863. Prior to his death, Currier and Ives had published four of his works as lithographic prints. After his death, six additional paintings were printed; one of those was Home to Thanksgiving. Today, this picture still evokes memories of a time of family reunions after being separated by miles and, sometimes, even years. Except for the style of dress and type of transportation in Durrie’s painting, American families still gather Home to Thanksgiving.

Durrie and the New England Farm

Library of Congress – Home to Thanksgiving