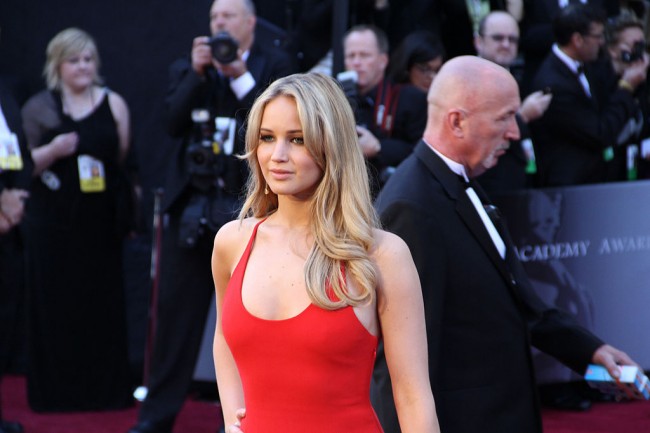 Actress Jennifer Lawrence has purchased her “starter home” in the Hidden Valley community of Beverly Hills for $8.225 million. Previous owners of the home include Ellen Degeneres, Paul Hogan and Jessica Simpson. Until now, she has lived in a two-bedroom condo in Santa Monica that is owned by her parents.

JLaw’s new French-style abode is 5,500 square feet, including five bedrooms, five-and-a-half bathrooms, a gourmet kitchen with top-grade appliances and an in-home gym. A sunny breakfast room opens to the backyard. The secluded grounds, which have been described as “park-like,”  include a koi pond in the front, extensive lawns and a swimming pool in the back, with various terraces and patios all the way around.

The 24-year-old bought the house in October and recently shared with Mario Lopez on Extra that she is in the process of remodeling. Lawrence jokingly called the house the “neighborhood whore” because “everybody has lived there.” The last big renovation and design upgrade took place before the 2013 sale when Simpson hired Shabby Chic Couture’s designer, Rachel Ashwell. Celebrity columnists are speculating about what sort of design changes Lawrence will make.

The Hunger Games star’s new digs were built in 1991 and have appreciated considerably. Former owner Simpson lived in the house from 2005 to 2013, selling the home to Sydney Holland for just under $6.5 million before Holland sold to Lawrence for $8 million+ after barely a year. Since the house was listed this past July for $7.895 million, the $375 thousand price differential indicates that there was some hot competition before Lawrence won the top bid.

After a string of movie successes, including Oscar nominations for Winter’s Bone and American Hustle and an Academy Award win for Silver Linings Playbook, Lawrence is considered one of the most promising young talents in Hollywood. She was named by Variety as one of the Top Ten Actors to Watch in 2010. She has achieved popular success with X-Men: First Class and The Hunger Games movies, including 2013’s The Hunger Games: Catching Fire and the just-released The Hunger Games: Mockingjay, Part 1.

Lawrence’s role as Katniss Everdeen, the heroine in Suzanne Collins’ Hunger Games series, has made her a recognizable face around the world, and money and parts are continuing to roll in. She is already cast to reprise her role as Mystique in 2016’s X-Men: Apocalypse and will also be playing Katniss in the final Hunger Games release, slated for release in late 2015. She is expected to have eight movies out in 2015 alone so it does not appear that she will be able to spend much time in her new home.

The house is in the same neighborhood as Penelope Cruz and the Keith Urban-Nicole Kidman family. Other A-listers include Mila Kunis and Ashton Kutcher who bought their 7,300-square-foot house for more than $10 million earlier this year, making Simpson’s sale price and Lawrence’s $8.2 million purchase price look comparable. Cameron Diaz, who bought her property in 2010 from Candice Bergen, also lives in the neighborhood. With a gorgeous first home in a very secure neighborhood and plenty of parts on the horizon, the future is looking bright for this rising young star.