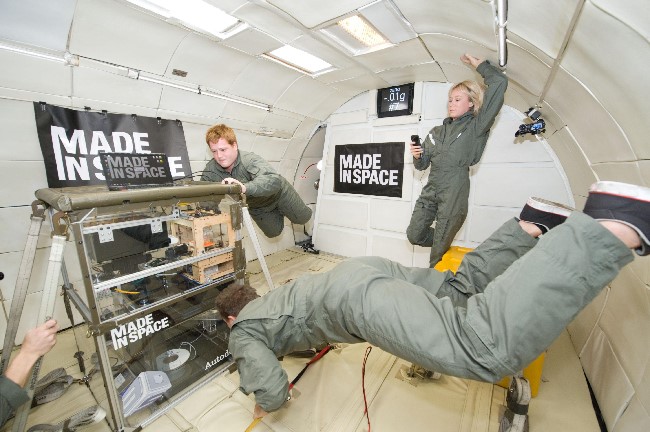 International Space Station (ISS) astronauts took a step in the direction of bringing science fiction to life in mid-November as NASA’s station commander Barry “Butch” Wilmore set up the first zero gravity 3D printer in the orbiting lab. The machine arrived in good operating condition via a SpaceX Falcon 9 rocket by way of a Dragon supply ship in late September 2014. Designed by Made in Space and installed in the Microgravity Science Glovebox, in cooperation with NASA, the hope and goal is to use 3D printing to make space exploration safer, more efficient and less expensive.

The experiment with 3D printing in space is the first step on a road that NASA and Made in Space hope will lead to a thriving international space manufacturing business to support self-sufficient human colonization of the solar system. The printer extrudes layers of hot acrylonitrile butadiene styrene (ABS), the same plastic used in LEGOs, to create 3D objects modeled on an engineer’s specifications. The first stage of testing the International Space Station printer is to have it produce at least 20 demonstration parts, which will also be replicated by a ground-based twin machine for comparison with the space made products. Made in Space’s chief technology officer, Jason Dunn, explains that the earth-made and space-made products will be tested for strength and robustness and the microgravity version examined for accuracy in the replication process.

Although the first tests are with plastic, the target is to move towards printing with aluminum and other metals used in aerospace engineering. NASA 3D metal printed a rocket engine part in 2012 so now the challenge will be to see if they can repeat the feat safely in zero gravity conditions. Dunn said a collaborative study by NASA and Made in Space concluded that around 30 percent of the International Space Station’s broken parts could be replaced with parts made on the 3D printer, saving time, equipment and money in flying new parts in every time there is a breakdown. It would cut down on the payload for each launch vehicle and allow astronauts to manufacture parts as needed rather than building parts in advance whose main goal is to survive the violent shaking and noise levels at launch. NASA’s 3D Printing in Zero-G project manager, Niki Werkheiser says the ability to manufacture what they need while in orbit, at the time they need it, completely changes the traditional modus operandi on the International Space Station.

The ability to print what they need when they need it instead of waiting for a supply ship from earth to deliver materials would go a long way towards freeing up the supply chain. Tools, exercise and medical equipment are also on the list of items that the 3D printer could produce to improve efficiency on the International Space Station. NASA confirms that their aim is to test on-demand machine shop operations in space in preparation for manned deep space missions and space borne manufacturing.

NASA plans to send up a second 3D printer to the space station in 2015, capable of withstanding higher temperatures and plastics that are more durable. This one will be available for companies to test 3D printing of their own projects in space. The long-term goal is to equip the ISS with the ability to self-supply their own replacement parts rather than burning millions in taxpayer money in rocket fuel to launch a ship into space several times a year. Bringing this dream to life would empower International Space Station astronauts to come a step closer to the replicator of Star Trek, although voice-activated instant materialization of every need and want is still a ways off.