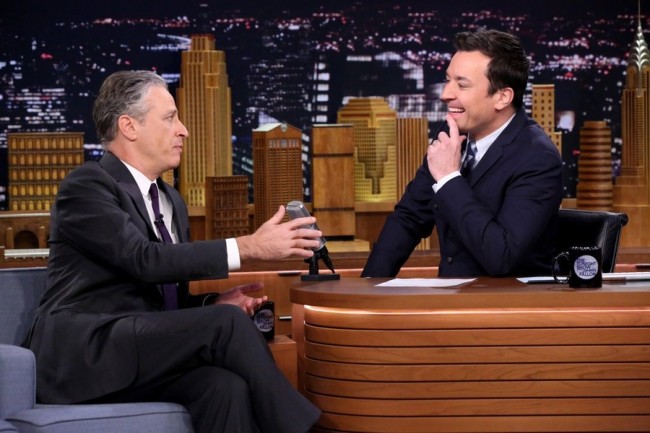 On The Tonight Show Starring Jimmy Fallon, the host of the show, Jimmy Fallon, had on guest Jon Stewart from The Daily Show who also directed the acclaimed movie Rosewater, and from Top Chef, Padma Lakshmi. Besides these two guests, Fallon’s third guest was the hilarious comedian, Jim Gaffigan, who has written the book, Food: A Love Story.

Jimmy Fallon warmly welcomed his audience, who gave him a standing ovation. Then he told jokes about celebs, politicians, and other things in the news of the day in his monologue. Some of the jokes, somewhat paraphrased, follow.

“Big show tonight! Jon Stewart is making his very first appearance on the Tonight Show. Here’s what people are talking about,” Fallon began. “This is very big. Yesterday, the Senate came up one vote short of passing the Keystone funding.”

“Chef Gordon Ramsey thinks some sabotage occurred. He thinks somebody booked all the rooms in a hotel because nobody showed up.”

“Everybody’s talking about The Hunger Games: Mockingjay Part One. Now, it’s time for The Hungry Names. We sent a reporter on the street to deliberately say the name of the movie incorrectly, and see if anybody notices.” It was a funny bit; the “reporter,” kept slaughtering the name, but nobody seemed to notice.

“Researchers at Google can accurately caption anybody’s photo, but there are still a few bugs they need to work out. For instance, it captioned the recent Kim Kardashian photo as ‘Woman being chased by two butterball turkeys.’”

Jimmy Fallon then did a comedy bit called “Obama Expressions.” He showed photos of Obama, with many expressions, and said “captions,” he had made up for the photos. It was a pretty humorous bit. When Fallon and the Tonight Show came back on, Jon Stewart joined him as the first guest of the evening.

“I am. I feel like I’m among friends,” Jon said. He and Fallon talked about their history together, and Fallon showed a clip from The Roots from 1995. They looked and sounded far different that they do today.

“I always knew there was this hot band. But, there was another young performer on the show, with something special,” he said. Stewart was going to show a car made entirely out of chocolate, but behind the curtain, Jimmy Fallon was there, and he just had a part of a chocolate steering wheel in his hand. He said “Sure, blame the fat man for eating the car!”

Jimmy Fallon read an old quote from Denis Leary: “As the show continues, eventually, it will get uglier. There will be this little Jewish man, just raging at the camera.” The Tonight Show Starring Jimmy Fallon went to another commercial break, but Fallon said they would “talk about Rosewater when they return.”

They talked about the movie that Jon Stewart directed, Rosewater, after the break. It is based on a true story about a man held in jail for four months in Iran. In the interrogation, the men doing the interrogation showed him a clip from The Daily Show. The movie is a serious one, but it has moments of humor in it. 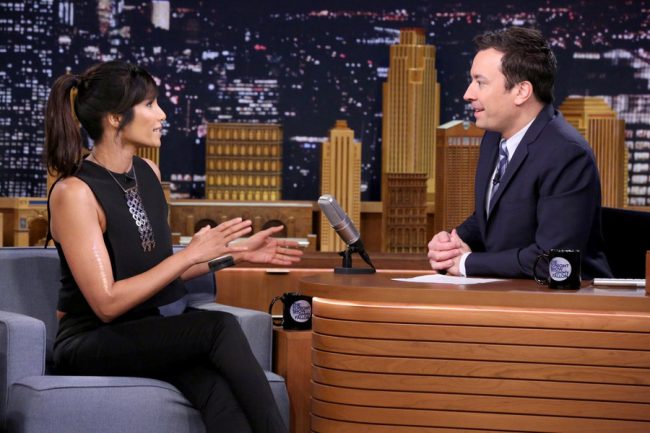 After another break, The Tonight Show Starring Jimmy Fallon came back and Jimmy introduced Padma Lakshmi, from Top Chef. Padma came out dancing. She said she had a toy monkey named after Fallon that she called Jimmy the Monkey that she took with her everywhere. Her daughter, she said, is named Khrisna. Jimmy gave her two new toy monkeys, one with a Jimmy cape on and the other one with a Khrisna cape on.

Jimmy and Padma talked about Padma’s daughter loving the movie Frozen. Also, they talked about Top Chef, and then Padma gave Fallon three quick tips about Thanksgiving. One was to invite strangers to eat with you, another was to cook the turkey the night before. She also recommended placing fruits inside of the turkey while it is cooking. It sounded like it would be delicious. 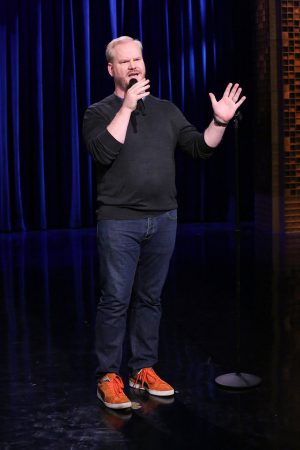 Next, Jim Gaffigan was on the Tonight Show, after more commercials. He is, of course, the comdedian who had a hilarious routine about “Hot Pockets” a couple of year ago. He has also written a couple of very funny books. Dad is Fat and his latest one, Food: A Love Story.

“I don’t know if you can tell by looking at me, but I’m a man,” he said, starting out his stand-up routine.

“All a guy has to do with his hair is not have a mullet. All you have to do is not have a mullet; A+. And even then, not everyone can pull it off.” Gaffigan joked about how women spend so much time with their appearances, while it does not matter so much about men.

“My wife is a woman. She is — she’s attractive and slim. I look like I had two wives and ate one of them,” Gaffigan joked. He said “My wife has the ability to remember every horrible thing I’ve ever done. And, she’ll just bring it up. I don’t want to misrepresent her — she’s very forgiving. It’s just the forgetting part.”

Gaffigan then talked about the Pope, saying “The Pope — now, that’s a tough job.” He joked about being at Round Robin and getting a phone call, and said he does not know why anyone phones anymore when there is text messaging and emails. He said “If somebody’s calling, it better be because both hands have been chopped off.” He said the call was from one of his kids, just saying “I wanted to hear your voice, Daddy.” Then he said “Buy my album and you can hear me.”

Jim Gaffigan and Jimmy Fallon talked about his book, and how his wife helps by collaborating with him. He is a little worried that he is running out of types of food to make jokes about. Gaffigan is LOL funny — check out the video of his appearance below!

The Tonight Show Starring Jimmy Fallon was another terrific Hump Day episode. Jon Stewart was the first guest of the show, and he and Fallon talked about how long they have known each other, and also about the movie, Rosewater, which Stewart directed. Attractive and talented chef Padma Lakshmi then discussed with Fallon details about her family and the TV series, Top Chef, that she is in. Jim Gaffigan was funny, and talked about his family and latest book, Food: A Love Story, with Jimmy Fallon.