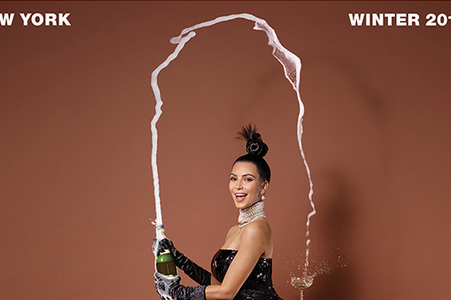 Kim Kardashian has put her bare bottom, covered in oil, out there for the world to see and this tacky photo has created a turbulent whirlwind of controversy as the image was meant to “break” the internet when it appeared. While there is no real evidence that the magazine photo for Paper (whose theme for this issue was “Break the Internet) broke anything, it has certainly put Kardashian right out where she likes to be, semi-naked and on the net. In keeping with the usual fanfare surrounding a Kim Kardashian picture where she shows off inappropriate bits of her body, there has been a lot of fun poked at the reality TV star.

Several memes have been making the rounds, perhaps the best being Bruce Willis heads in place of Kim’s bum cheeks (the star has the perfect expression on his face) and number two has to be the one where Kardashian’s rear has been replaced with a horse’s backside… The latter meme may be suggesting that Kim is a horse’s a**, just a thought but it certainly seems to fit. The actual photo on the magazine features no nudity of Kanye West’s wife and mother of North at all.

The actual photographic layout has Kim with a glass on her bum and holding a champagne bottle. The bubbly is flowing from the bottle into the glass perched on her bottom. It is a recreation of photographer Jean-Paul Goude’s original picture, titled “Champagne Incident” and Kim does this for the cover, but is fully dressed. The first photo of Goude’s has the model in her birthday suit and this Paper cover was not going to even slow the Internet down, let alone break it. So an alternative picture was made showing that Kardashian bottom bare and covered in tacky oil obviously meant to be turbulent and to “break the Internet.”

Alas, the world has apparently seen enough of the Kardashian body to last is a lifetime and the Internet has not broken. Paper has promised to release more photos of the Kardashian image in order to continue their theme but it is doubtful whether the magazine will be able to reach the desired goal of breaking the net. The many memes, however, that have been making the rounds may actually come closer to at least giving the world wide web a brief pause.

All that is left is for Seth Rogen and James Franco to somehow come up with a way to poke fun at West’s missus, yet again. The last time was the music video, and song, where Kim and Kanye appeared (apparently) naked in the 2013 Bound 2. The two friends, Rogen and Franco who will be in The Interview December this year in cinemas across the world, recreated the eclectic, and downright weird music video, and their final effort was, if anything, better than the original.

Perhaps Seth Rogen could recreate the photo of Kim Kardashian’s bare oiled bottom by substituting his own and cover up the tacky display with a clothed James Franco, no turbulence but it could be at least as funny as the music vid. So how about it guys, it is now your turn.