Lions Prove They Are Not Going Away 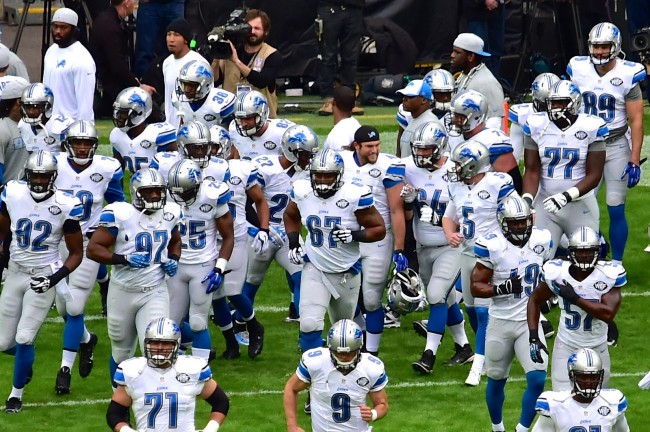 The Detroit Lions rolled past their division rivals Chicago Bears 34-17 on Thanksgiving, proving they are not going away in the race of the NFC North. The Lions overcame a 14-3 first quarter deficit, and outscoring the Bears 31-3 in the final three-quarters. Quarterback Matthew Stafford out-shined his counterpart Jay Cutler going 34 of 45 passing for 390 yards and two touchdowns. The win keeps the Lions on the heels of the first-place Green Bay Packers, a team they defeated 19-7 in Week 3.

Doubts emerged about Detroit being contenders in the NFC after losing two straight. Lost is the fact those two losses came at the hands of Arizona and New England, who both currently hold the best record in the NFL at 9-2. Thursday, the Lions pushed those losses behind them, especially Stafford.

After struggling the past three weeks trying to get readjusted with the hobbling Calvin Johnson, Stafford found his groove. He picked apart the Bears’ defense with his precise passing. He showed off his accuracy, at times throwing the football around like a dart to his receivers. On one play he found zipped the ball to receiver Golden Tate through the hands of two Bears’ defenders. His performance was marvelous to say the least.

But it was Johnson who stole the show, snatching in 11 receptions for 146 yards and two touchdowns. Johnson’s matchup with Bears rookie cornerback Kyle Fuller was unfair. He asserted himself, showing how great he is in case anyone forgot while he struggled through an ankle injury that at one point sidelined him for three weeks. It was no coincidence Stafford’s breakout performance came with the first true healthy sighting of Johnson since September.

Getting back to 100 percent with a healthy Johnson is imperative for the Lions. Already boasting the No. 1 scoring defense, the offense moved seamlessly down the field showing glimpses of how good they can be with all their pieces in place. That may not be good news for the Packers and the rest of the NFC, as the Lions prove they are not going to fade away so easily. Following Thursday’s win Johnson said Lions’ players “still believe” in their talents and what they have in Detroit.

While a dominating win over the Bears may be considered by some as no fair measuring stick, Thursday’s win could represent what is ahead for Detroit. Looking ahead at their schedule, the Lions host the hapless Tampa Bay Buccaneers (2-9 record), followed by a meeting with the Vikings (4-7) before their rematch with the Bears (5-7) in Chicago.

After seeing how well the offense can be behind a healthy Johnson’s ability breakdown opposing defenses, that’s three opponents who are well below .500, making it a good possibility Detroit could possibly be 11-4 when they travel to Green Bay in a pivotal Week 17 matchup.

Detroit is poised to be a huge threat to not only the Packers but the rest of the NFC contenders. Arizona currently holds the best record in the conference at 9-2, but their chances of holding on to that spot and eventually getting home-field advantage is in jeopardy with the loss of their quarterback Carson Palmer.

Philadelphia also has issues at the quarterback position. Week 1 starter Nick Foles is sidelined by broken clavicle, and while replacement Mark Sanchez has played considerably well in Foles’ absence, Sanchez being able to stay consistent down the stretch is no guarantee.

Entrenched in the heat of both the NFC North title and NFC wild card races, Detroit has a great chance to gain confidence about their team over the next few weeks. If their offense continues to improve with Johnson back in the lineup, and with their very impressive defense, they could shape up to be one of the most complete teams in the NFC by the end of the season. That may not bode well for the competition because despite their previous struggles, the Lions proved Thursday they are not going away.