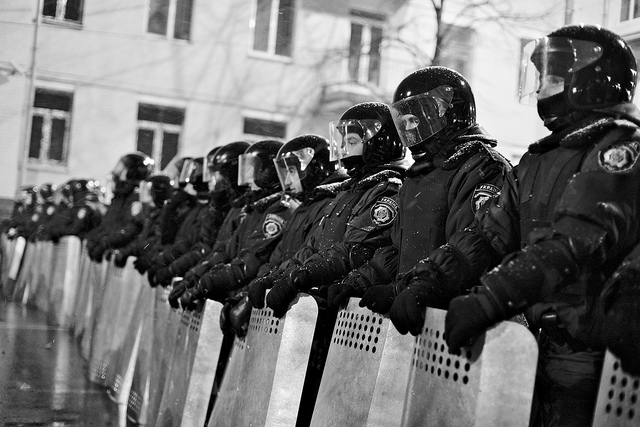 Milton Hall’s on death July 1,2012 after police shot him 46 times has prompted two lawmakers in Michigan to come up with proposals requiring police officers to wear on-body cameras. These cameras would record interactions between the public and law enforcement officials to eliminate claims of police brutality.

The eight police officers were called at the Riverview Plaza store in Saginaw after Hall refused to pay for coffee. Several investigations into the incident ended with no charges filed against the police officers. The department of Justice announced early this year that it would not press charges against law enforcement officers well. As a result, last week The American Civil Liberties Union of Michigan (ACLU) testified before the Inter-American Commission on Human Rights(IACHR) on the Justice Department’s failure to prosecute the six police officers that were involved in Hall’s shooting.

According to the website Mlive, Rep. Jeff Irwin, D-Ann Arbor, and Rep. Tom McMillin, Rochester Hills, said they hoped their proposals, if passed into law, will be ready to be implemented in 2015. Police officers would be required to keep the cameras on from the time they start their duty to the end, with the exception of bathroom breaks or when they speak to family members. The videos would be stored for several years, and would only be released for viewing with a court order or with the permission of the person appearing in the video. In the case of Milton Hall, a video recorded by an armature, aired by CNN provided details of the shooting that had not been previously released to the public.

Irwin said he had received positive feedback from law enforcement officials he has spoken with in relation to the proposals they had drafted to address scenarios similar to the shooting of Hall. An official of Michigan lodge of Fraternal Order of Police said some issues still needed to be worked out. Sgt John Sadowski of Saginaw Police Township said police cars were already equipped with video cameras, and law enforcement officials were already using microphones for communication. He doubted that the new measures would bring better results. However, Reps Irwin and McMillin said the video cameras in vehicles sometimes failed to pick up incidents because they were wrongly positioned or were too far away from the scenes. McMillin gave an example of Milton Hall’s police shooting-where only two cameras recorded the incident-as a legitimate reason that prompted the drafting of the proposals for use of on-body cameras.

Shelli Weisberg, an official of the American Civil Liberties Union of Michigan, said there was a need to have a standardized method of operating the on-body cameras so that issues unrelated to a police investigation are not revealed to the public, or in cases where law enforcement officials delete parts of a video. She supported the requirement, and was optimistic that all the lingering questions would be addressed.

The police shooting of Milton Hall has not only prompted proposals for on-body cameras , but has also encouraged some technology companies to create devices that can solve the problem. Newsweek reported on October 27 that a California startup company, Yardam Technologies of Santa Cruz, is testing a device that can be inserted in the handle of a police gun to record the use of a weapon in real time. The device can tell the gun’s location, whether it was in its holster, and if it was loaded. Yardam spokesman Jim Schaff told the Huffington Post he expects the device will provide facts that could absolve police officers from blame in controversial interactions with members of the public. The devices will also make it possible for law enforcement officials to be held accountable for their actions.