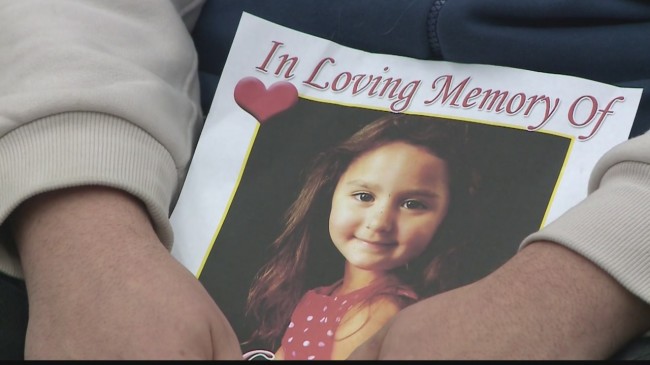 The family of Laylah Petersen, a 5-year-old girl who was the victim of a deadly shooting in Milwaukee Thursday night, has donated her heart to another child. The girl was shot and killed in her home by one of a dozen bullets fired at the home by two people. One bullet came through the wall and hit Laylah in the head as she was sitting on the couch watching television with her grandfather. She died at a local hospital.

No motive for the shooting is known and at this time there are no suspects. Police initially thought that the house may have been the target since all 12 shots they believe were fired struck it, but now think the perpetrators may have been mistakenly shot at the wrong house. Police Chief Edward Flynn said several theories are being explored, and they are interviewing witnesses and hoping to find some surveillance video.

Milwaukee police captain Aaron Rapp said that they are “befuddled” at this time as to the reason for the shooting. When announcing that Laylah’s heart had been donated to help another child, the 5-year-old victim’s family also pleaded for the public’s help in finding the shooters. Two children were in the house where they were being raised by their grandparents. A makeshift memorial has developed outside the Milwaukee home, with people leaving flowers and toys. Flynn said this is a loving, stable, working family in a stable neighborhood where people are trying to do the right thing.

Flynn said police are canvassing the neighborhood for witnesses and are getting good tips. He urged anyone with any information at all to come forward, saying at this point even rumors are better than nothing. A dozen shell casings were found at the scene and police are looking into whether more than one handgun was used in the shooting. At this time they are looking for one or more guns.

According to Flynn, 11 children under the age of 13 have been shot so far this year, compared to two last year. Laylah is the third child under age 13 shot in Milwaukee this year to be considered a homicide. Richard Schwoegler III, a spokesman for the Peterson family, is urging faith-based organizations to go into the community and try to build relationships with troubled people. Coalition for Justice, a community group, has requested a meeting with the city’s police chief, district attorney, mayor and city council to address the gun violence issue.

The Milwaukee Alcohol, Tobacco and Firearms Field Office is offering a $5,000 reward for information that might lead to the capture of those responsible for the 5-year-old’s shooting. Flynn said that the police would not rest until they found “the perpetrators of this vicious crime to justice.” He said that Laylah was going to be in the hearts of the police, just like her heart is going to be in someone’s else’s, and said she will always be remembered by not only her own family but by the family that now has her heart. Flynn is carrying a photograph of Laylah in his breast pocket, which he said he will continue to do “until those guys go to jail.” The child’s funeral is scheduled for Wednesday.