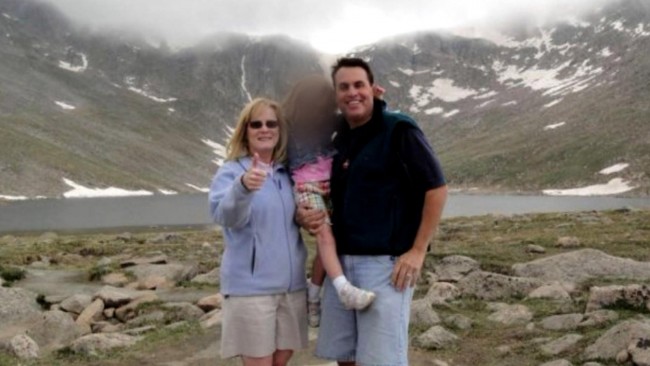 To celebrate the 12th anniversary of their wedding, Harold and Toni Henthorn went hiking in Colorado’s Rocky Mountain National Park on Sept. 29 of 2012. Harold wanted his wife to see the autumn leaves and the snow-covered mountains. They begin their hike on Deer Mountain, on a steep trail covered with rocks. They then left the trail in order to take in the scenery from a ledge. As Toni took a photo, she fell over and tumbled face-first off of the ledge, landing 40 to 50 feet below. Harold Henthorn now faces charges of pushing Toni off of the cliff in order to collect money from her insurance policies.

Henthorn, who currently lives in Highlands Ranch, Colorado, was the only person to witness what happened on the day of his wife’s death. The coroner’s report says that 15 minutes passed before he found his wife, still breathing, on the terrain below. By the time rescuers reached her an hour and a half later, Toni Henthorn had died. Because her autopsy findings included widely-scattered bruising as well as blunt-force trauma to her neck and head, the coroner was unable to definitely conclude whether Toni had fallen or if she had been pushed. According to the Larimer County medical examiner’s written report, “Homicide cannot be excluded.”

Henthorn, 58, was indicted in Colorado by a federal grand jury this week for first-degree murder. Few details of the prosecution’s case have been released, and all that is known is that the indictment filed against him charges that he killed his 50-year-old wife with malice and premeditation. He was arrested on Thursday after dropping the couple’s 9-year-old daughter at school.

Todd Bertolet, the brother of Toni Henthorn, admits to having long doubted his brother-in-law. Bertolet describes Harold Henthorn as manipulative and controlling, saying that in order to persuade Toni to move to Colorado from her family’s home in Mississippi, Harold lied to her about a business he claimed to have owned.

Harold Henthorn’s in-laws recall that he seemed reticent to speak about his first wife, who died in a freak accident in 1995. Sandra Lynn Henthorn, 30, and Harold were working together to change a flat tire when, according to the coroner who examined Sandra’s body, the car fell off of the jack and crushed her to death. Her death remains under investigation by the Douglas County Sheriff in Colorado.

Bertolet recalls being told by Harold Henthorn that a car accident had killed his first wife. He remembers that Harold requested that pictures of her be removed from homes of relatives and friends, “almost like she didn’t exist.”

An ophthalmologist with a successful practice in Jackson, Miss., Toni Henthorn met Harold Henthorn on an online Christian dating website. Bertolet says that at the time, his sister was lonely and divorced and that “she overlooked some character flaws” in Harold when they met. Harold told Toni that he was rich and lied to her in order to get her to move to Colorado, but once she did, Harold became obsessed with their finances and began to display odd behavior. He would take business trips without telling Toni where he was traveling, and although he said he was a self-employed fundraiser for non-profit organizations, Toni’s relatives are not sure that he held any sort of job.

Toni Henthorn’s family became aware that she held life insurance policies of $4.5 million only after her death. According to court filings, a claim against one of the policies was filed a mere two days after she died – the same day on which her body was being autopsied. That claim has yet to be paid. The documents also reveal that Harold Henthorn was the beneficiary of bank accounts in Toni’s name which contained hundreds of thousands of dollars.

Should the Colorado resident be found guilty of pushing his wife off of a cliff in order to collect the money on her life insurance policies, Harold Henthorn could be sentenced to life without parole and fined a maximum of $250,000. Her relatives are seeking custody of their daughter.