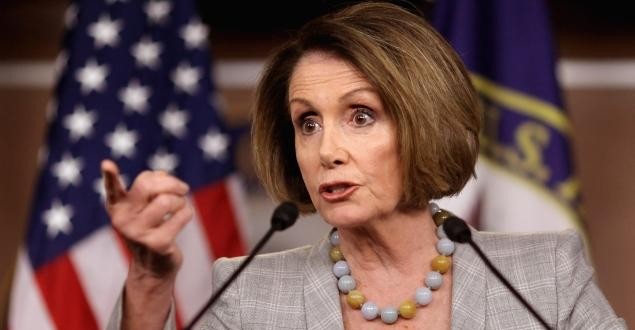 Incredibly, Democrats in the United States House of Representatives have chosen to re-elect Nancy Pelosi as their leader and, in order to divine how and why this could happen, it would seem fitting to look back at some of Pelosi’s memorable words of wisdom. Representing California’s 12th Congressional District – arguably, the safest Democratic seat in the country – Pelosi virtually inherited her seat in Congress when her outgoing predecessor, Sala Burton, named her as a successor and instantly conveyed upon her the support of some powerful political connections. This happened in 1987 and Pelosi has run virtually unopposed ever since.

Pelosi, originally from Maryland, is mostly known for being the only woman to serve as Speaker of the House, for resisting calls to bring impeachment proceedings against President George W. Bush and for being accused of insider trading. She is also known, however, for a number of outrageous statements, hilarious flubs, an obvious disdain for the Constitution and more than a few shameless lies. Among the unforgettable words of wisdom from Nancy Pelosi, a few that shine the brightest are now recounted:

Since numerous videos recently emerged of MIT economist Jonathon Gruber telling various audiences that Obamacare – the Affordable Healthcare Act (ACA), which he helped to craft and was instrumental in promoting – was really a massive redistributed tax and became law thanks to “the stupidity of the American voter,” Democrats, including President Barack Obama, have been trying to pretend that they have never heard of Gruber and that he did not work on ACA. Pelosi, who personally cited Gruber’s contribution in a 2009 interview, denied any knowledge of the man, during a recent press conference. “I don’t know who he is,” she claimed. “He didn’t help write our bill.”

For context, Pelosi – back in the 2009 interview – pointed out Gruber’s own conclusions about healthcare rates under the proposed Democratic healthcare legislation. “I don’t know if you have seen Jonathan Gruber of MIT’s analysis of what the comparison is to the status quo versus what will happen in our bill for those who seek insurance within the exchange.” she said at the time. Pelosi’s office has offered the explanation that politicians often cite the work of various experts and that the California Democrat meant that she didn’t know him personally. This seems to be quite a stretch, however, considering that Pelosi herself was very much involved with efforts to get Obamacare passed and Gruber was a frequent visitor to the White House at that time and is on video speaking, in some detail, about how the legislation would be presented to the American people.

This is not the first time Pelosi is on record, denying something that she is on record as having done or said. Appearing on Meet the Press in July, 2012, she touted the benefits of Obamacare, saying “Everybody will have lower rates, better quality of care, and better access.” At a press conference in 2013, when queried about the comments, she replied “I don’t remember saying that everybody in the country will have a lower premium.”

Another immortal Pelosi quote was delivered in 2010, during a speech before the Legislative Conference for the National Association of Counties. Once again, expounding on the, apparently, urgent need for healthcare reform, Pelosi spoke about the proposed legislation at some length, adding the comment “But we have to pass the bill so that you can find out what is in it, away from the fog of the controversy.” Whilst her many supporters in the mainstream media have, since, attempted to brush this off by saying that it was, somehow, taken out of context, it completely goes against the spirit of all that Obama promised, when campaigning for the presidency. He often bragged that his administration would be the most transparent ever and that major legislation would be posted online first, so that Americans could consider the relative merits. None of these lofty ideals applied to Obamacare, as it turned out.

In January of 2009, when the Obama administration was trying to push through a $787 million ‘economic stimulus’ package, the situation appeared desperate; so much so that Pelosi foresaw catastrophic consequences if the bill was not passed. “Every month that we do not have an economic recovery package 500 million Americans lose their jobs,” she warned. A slip of the tongue, surely; but no, as she quoted the exact same figure during an interview with Chris Wallace on Fox News, that same month.

Neither is Pelosi above making up fictional Bible passages. In a 2008 Earth Day news release, she decided to minister; “The Bible tells us,” she explained, “in the Old Testament, ‘To minister to the needs of God’s creation is an act of worship. To ignore those needs is to dishonor the God who made us.’” These words do not appear anywhere in the Old Testament.

Appearing on Meet the Press in 2008, Pelosi decided to expound upon her vast knowledge of the energy industry and promote the use of natural gas. “I believe in natural gas as a clean, cheap alternative to fossil fuels.” she said, and later also pointed out that natural gas, which is a fossil fuel, “is cheap, abundant and clean compared to fossil fuels.”

This list of Pelosisms – memorable words of wisdom, indeed – is, by no means, complete, and Americans can look forward, no doubt, to many more. None of these quotes are new – other than her denial of Gruber – but they do bear a re-run; if only to remind the Democratic Party that their leader in the House of Representatives is either stunningly stupid, or she – like Jonathon Gruber – believes that everyone else is.