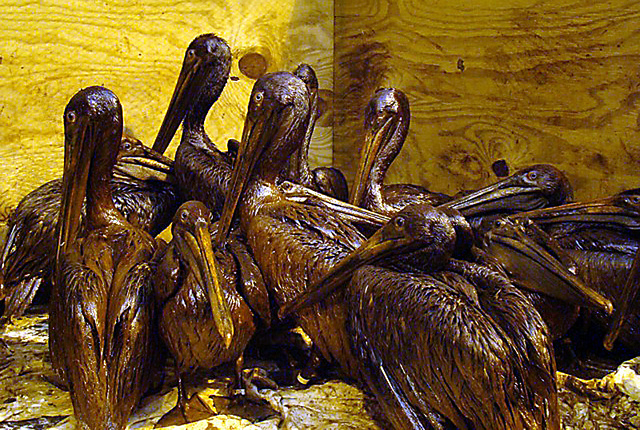 A new documentary revisits the BP Oil spill in the Gulf Coast. It has been four years since the rig exploded releasing an underwater geyser of crude oil. The world watched with baited breath and righteous anger until the gushing well was capped – and then largely forgot about the disaster. Gulf Coast residents are still dealing with the aftermath of one of the worst environmental catastrophes in history.

The oil rig exploded on April 20, 2010. In the almost three months before it was controlled, 200 million gallons of crude oil were pumped into the Gulf of Mexico. The contamination devastated the marine ecosystem and destroyed the livelihoods of many residents. Filmmaker Margaret Brown documented the continuing aftereffects of the disaster in her film, “The Great Invisible.”

Originally from the Alabama coast, Brown was interested in how people were coping years after the explosion. Had the Gulf been cleaned up enough to restore the businesses affected? Was life back to normal? She found her answers were a resounding, “No!” People who depend on the ocean are still struggling and suffering. They are frustrated by too little information and being thwarted at every turn by a company that does not want to take responsibility. Too much of the money goes to ramp up tourism rather than restore ecosystems.

It is true that a massive clean-up effort was undertaken to rid the Gulf of the worst of the oil. Billions have been paid in settlements to people who lost property and businesses, but many environmentalists, residents and business-owners claim the coast has not fully recovered and oil lingers. In one excerpt of Brown’s documentary, a man shows the camera the streaks of oil in his freshly caught shrimp.

Residents along the Gulf Coast were caught off-guard by the oil spill; they did not know how to react to it. They are a resilient people used to damage caused by natural disasters such as hurricanes, but, after a hurricane passes, houses, businesses and towns can be rebuilt. Brown found that the problems were more wide-ranging with the man-made catastrophe. It disrupted the way of life, the sources of income, and the traditions of the region. People are still feeling the economic consequences of the spill.

Brown said her film started off being about the people of the Gulf Coast and the hardships they still face. She wanted to let the world know that life along the shoreline is still impacted. However, she says halfway through filming the story began to take a turn. She started to examine the love affair people have with oil. Brown began to see her own culpability in her dependence on oil to travel and operate her daily life. As long as people desire an oil-dependent existence, these types of environmental disasters are likely to happen. Who should really be held to blame? The companies meeting consumer demand, or the consumers themselves?

Brown says she intended to make a documentary about a small place; about what happened when the national spotlight went away and local people were left alone to cope with disaster. Along the way the film became about a larger issue. How long can people pretend that increasing consumption of oil is not sabotaging the ecosystems in which they live?

Last month BP executives tried to assert that environmental contamination had been wildly overstated. However, it was also affirmed in October that the oil spill had left a large, oily “bathtub ring” on the seafloor. As long-term damage continues to be assessed, a string of court cases attempts to hold BP and Transocean liable. In the meantime, Americans are more oil hungry than ever. Many are willing to sacrifice the environment to abundant, cheap oil.

Margaret Brown is one person reminding people of where oil dependence can lead. Her new documentary revisits the BP Oil spill in the Gulf Coast. “The Great Invisible” refocuses on lives interrupted by environmental disaster.