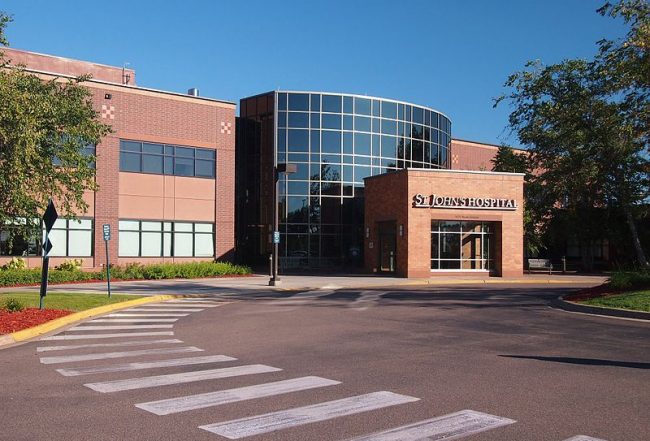 Police in Maplewood, Minn. have released a video showing a 68-year-old patient at St. John’s Hospital attacking nurses with a metal pipe. The video came from the hospital security system, and was released on Thursday under public record laws because the investigation into the incident, which happened last weekend, has been closed.

Four nurses were injured in the attack by Charles Emmett Logan, who ran through the nurses’ station and hallways at about 2:00 a.m. Sunday, swinging a metal pipe that came from his hospital bed. As the nurses attempted to escape the patient ran after them, continuing to swing the weapon and repeatedly striking one nurse who had fallen to the floor. As the nurses ran into the hallway they tried to secure the door behind them but the patient broke through. They managed to secure the door after Logan left.

The nurses suffered injuries including one with a broken wrist, another with a collapsed lung and the others with cuts and bruises. According to hospital workers, the patient suffered from paranoia, but it is unknown what caused his rampage. Maplewood, Minn. Police Chief Paul Schnell said that the patient appeared to be under the delusion that he had to fight his way out of the hospital, believing that people were “out to get him.”

Another patient, Adam Linn, heard the commotion and people screaming, looked out the door of his room, which was just feet away from the nurses’ station, and immediately chased after Logan. Linn is a security guard who had just had his appendix removed. As he pursued the other patient it took another nurse a moment to unlock the door to allow him to reach the hallway. The video ends before Linn gets through the door to pursue Logan.

Police located Logan three blocks from the Minnesota hospital, and three officers were reportedly required to subdue him after their Taser probes failed to attach and immobilize him. He continued to struggle and refused to drop the metal bar, which was about 3-1/2 feet long and an inch in diameter, used to attach medical equipment to a hospital bed.

Once Logan was in handcuffs he immediately went limp and officers realized he had stopped breathing and had no pulse. They performed CPR and emergency crews returned him back to the hospital, where he was pronounced dead shortly after.

Logan’s family reports that he had no history of violence. However, according to people who knew him his behavior had changed recently and he had become confused and sometimes delusional.

Logan’s attorney, Shane Perry, said there had been a family disagreement earlier in the day. Perry had sought an emergency order from a Ramsey County judge to protect his client after a difference of opinion between the patient and his wife and daughter about his treatment. Perry said that Logan told him that he wanted to sell his house and give half the money to his grandchildren, which Perry believed indicated that Logan wanted a separation from his wife. The family left after reportedly causing a scene.

An autopsy has been done to determine Logan’s cause of death, with results pending. The incident is being investigated by the Minneapolis Bureau of Criminal Apprehension. In accordance with policy the officers involved in the patient’s death are on standard leave.