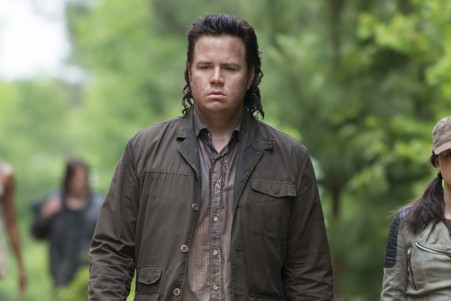 For those fans of The Walking Dead who also read the comics, the episode of Self Help finally allows TV to catch up as Eugene confesses that he is not a scientist and not the saviour of the world as claimed all along. Unfortunately for the mullet headed self-confessed coward, Abraham does not take the news at all well and may have actually punched the life right out of Eugene.

Self Help also allows the television version of the verse to show how creepy Eugene is as well. The scene where Rosita and the good Sergeant are making whoopee and she points out that Eugene is watching them have sex again, is pretty disturbing. On top of that, the man clearly sees that the couple notices him watching and Eugene does not stop till Tara comes up behind him.

Fans of the AMC series could not help but be suspicious of the “I’m smarter than you,” guy with the bad haircut and shorts. It really came as no surprise that the man really had no idea of what had caused the apocalyptic scenario that surrounds the survivors. When Eugene confesses to Tara that he sabotaged the church bus and at the end of Self Help when he finally reveals that he was a fake it seems like the high IQ coward is tired of the lie after all this time. The Walking Dead this week may see the end of Eugene as he certainly did not look well after Abraham reacted so badly to the news that he had been lied to the whole time.

It may have come as a surprise to some Walking Dead fans, especially those who have not followed the comics. Certainly the whole group in the show seemed to take Eugene at face value, perhaps taking for granted that anyone so socially inept and clearly of the opinion that he was smarter than everyone else must be what he claims. Of course Rick’s group also had Abraham, a type A personality if ever there was one, who sang Eugene’s praises to all who would listen and even those who did not want to listen.

What is disturbing about Self Help is not just that Eugene lied from day one, when he stopped Abraham from eating his gun, but also because Rick’s survivors are now split up. Maggie and Glenn left voluntarily with the little “save the world” group lead by the former Sergeant and now that the truth is out Eugene may not be welcomed back into the fold, so to speak. Not only that but they may not even head back that way.

The big question has to be what will Abraham do after he has a chance to think about this most recent turn of events. Certainly Eugene himself has the deaths of all those who sacrificed themselves for him on his mind. He begins naming them all before Abraham starts beating him to a pulp. In The Walking Dead: Self Help Eugene finally confessing that he is not what he claimed to be may mean that he ends up walking on his own to wherever the little group goes. Rick will most likely not be too pleased to see them come back and Eugene, who may “know things,” in this world may never have a chance to prove just what, if anything, he can do for the survivors in The Walking Dead verse.