The Walking Dead Self Help [Recap] 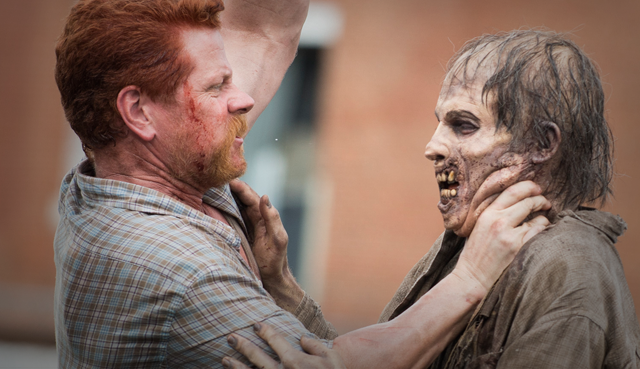 The Walking Dead began with Sergeant Ford driving the church bus. Rosita suggested that she “give him a shave all over.’

Eugene talked about “that preacher, and what he did.”

Maggie and Glenn talked among themselves about maybe Sheriff Rick Grimes and the rest would be following them soon. Glenn asked him about “missiles,” and Eugene said “That was classified.”

“I thought we were all over that,” Glenn said.

“What if we lived?” Glenn asked him.

Eugene talked about the leader of the Human Genome Project telling him that his hair made him look like a “Fun guy.” Eugene did not want his hair to be cut. He compared himself to Samson.

Then, Sergeant Abraham Ford lost control of the church bus and it flipped over. Of course, that immediately lured walkers, like someone clanging a dinner bell, and they all began to shamble towards the bus. Then, The Walking Dead went to a commercial break.

Back from the break on The Walking Dead, Sergeant Ford was pummeling a guy’s head in with a can. It was a flashback. In the present, everyone struggled to escape from the church bus. They had to get out and try to eliminate the walkers all around them. Carnage was taking place all over the place. Eugene looked very reluctant to also engage in the fighting.

On The Walking Dead, Eugene noticed that Ford was bleeding, asking him “Is that your blood?”

Ford admitted that it was. “We’re not stopping,” Ford said. “We’ll find another vehicle down the road. The mission hasn’t changed. We’re going on. We’re at war. Retreat means we lose. Every direction is a question. We don’t go back.”

Glenn Rhee told him “We’re going with you.”

Eugene seemed very flustered. The church bus was lit on fire, and they all headed off once again, as The Walking Dead went to another commercial break.

“Ellen!” Ford yelled on The Walking Dead after the break. He kept yelling for Ellen, in another flashback. A woman turned around with a young boy, possibly his son. Then, it was the present again, and Eugene, and others, were lighting a fire in a wastebasket inside of a bookstore they all were taking shelter in for the night. They were in the “Self Help” section. Rosita stitched up some of Ford’s wounds.

Glenn and Ford talked together later. Ford told him “Thank you for showing up. You could have made a case about leaving after the crash, but you stayed.”

“Yeah, but you could have broke it. What was I gonna do?” Ford went on to tell Glenn “It’s gotten to the point where you have to be strong, man. You’ve got to kill them. No one said it’s easy. no, that’s not the truth. It’s the easiest thing in the world now,” referring to killing people.

Ford and Rosita have sex, and Eugene is watching them. He tells Tara “It’s a victimless crime that provides both comfort and distraction.”

Eugene and Tara talked between themselves. Eugene said “The bus crashed because of me. I put crushed glass in the gas tank. I found light bulbs in the church.”

“What the hell? Why did you do that? Answer me!”

“I cannot survive on my own. I cannot.”

“So you killed the bus?”

“If I don’t cure the world, I have no value. You wouldn’t protect me,” Porter said.

“I’ll keep your secret. You know you messed up. Dude, you can’t do something like that again. We’re stuck with you, no matter what.”

Glenn and Maggie talked to each other in the dark, also. Maggie told him “We’re not back there anymore.”

Glenn told her “Well, we did almost die today. And, we don’t have a car. And we’re drinking toilet water.”

“It’s not about what was. It’s about what’s gonna be,” Maggie told him. They kissed,

It looked like somebody outside the building was looking in at everyone, but it was too dark to see who it was. Then, The Walking Dead went to yet another commercial break.

“You’re safe now,” Ford said in another flashback “I stopped them. You don’t have to be scared now.” His wife and two children looked scared of him, and the blood all over him. In The Talking Dead, after the episode, the actor who plays Ford said that the men he killed had been a part of the group he was with, and they had raped his family, so he took revenge by killing them all.

Rosita and Ford talked and Ford said that she just wanted to waste time. “You want us to stop,” he told her. He said “We’re taking it north.” They needed to head on again, because every moment they did not could mean people were dying, according to Ford.

They searched for another vehicle and Sergeant Ford found one that started, a fire truck. “It’s about time things started going our way,” he said. It started right up and he drove for a short bit, but then the vehicle stopped. “Maybe we’ve got an air filter filled with human remains,” he said. Walkers started to pour out of buildings and Eugene turned on a water hose on them, knocking them all down.

“I’ve been to eight county fairs and one goat rodeo. I never sseen nothing like that,” Ford said. He climbed up onto the roof to clean out the intake. Ford starts laughing, as he has seen the message “Sick inside let them die.” Then, The Walking Dead went to yet another commercial break.

When The Walking Dead returned from the commercial break, Everyone looked at Eugene, stunned. Then, Rosita said “You are a scientist. I know you can do things.”

“You’re not a scientist?” Glenn asked.

“I’m not a scientist. I’m a good liar and smarter than most people,” he replied.

“People died trying to get you here,” Rosita said.

“Eugene told them that “At this moment, I fully realized that there were no agreeable options. Again, I am smarter than you,” he told Ford. “Now, you may want to leave me here–” Ford started punching him over and over, viciously in the face. Ford walked away and stared up into the sky. Eugene was on the ground, all bloodied up.

Ford had another flashback, of when he was about to commit suicide. He had a gun in his mouth. “Help me! Help me please!” Eugene said, running up to him chased by walkers. After Ford killed him, he walked away.

“Wait! Wait up! You can’t leave!” Eugene called after him.

Without turning around, Ford said “Why?”

“Because I have an important mission,” Eugene said. Though he did not realize it at the time, by saying those words, he was actually saving Ford’s life by giving him a reason to continue living.

The Walking Dead Self Help was a great episode, and we got to learn a lot more about Sergeant Ford’s past. We also found out that “Dr.” Eugene Porter is not a scientist at all, but was rather just a “good liar.” What will happen to them now? Will they continue onward to Washington, D.C., or head back to join up with Sheriff Rick’s group again? Be sure to watch next week’s episode of The Walking Dead and perhaps find out!