By Chanel van der Woodsen on November 19, 2014No Comment 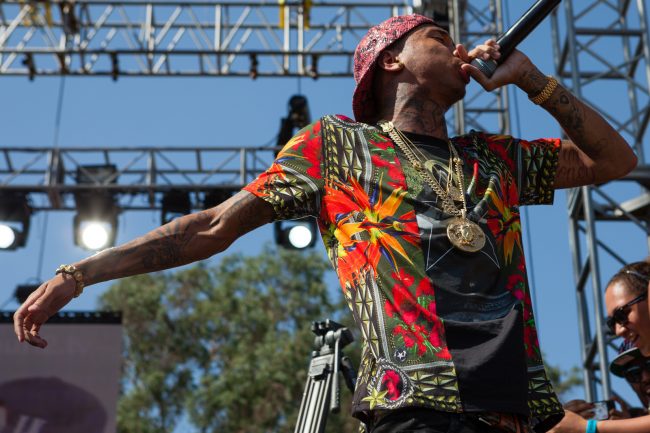 Rapper Tya chose to be a no-show at his own club appearance at a popular WeHo (West Hollywood) venue after club authorities refused to give a pass on his underage rumored girlfriend Kylie Jenner for entry. The event had been scheduled for this past Sunday, November 16.

Sources connected to the exclusive Greystone Manor recently gave an exclusive statement to popular gossip website TMZ regarding the matter, in which they gave specific details as to how the conflict went down. The 25-year-old reportedly attempted to pull out all the stops in order to get his self-proclaimed not girlfriend into the venue, efforts which included calling club authorities multiple times during the day to see if they could work something out in terms of giving her the green light. He also is said to have changed his scheduled arrival time to 1:30am in order to further negotiate, but his attempts at coercing managers ended up being unsuccessful. No one associated with the club was willing to budge even a little bit when it came to allowing a 17-year-old into 21 and over only premises, leading Tyga to pull his appearance altogether. The event itself was a pre-birthday bash of sorts, created to celebrate Tyga’s upcoming birthday of November 19th.

Tyga’s abrupt cancellation of his appearance is said to have angered a liquor sponsor quite significantly, as they had already put a very large sum of money towards the event in terms of alcoholic beverages. Greystone Manor is said to be scrambling to reschedule the California native’s appearance at a different time while still keeping the support of said sponsor, but this is viewed as extremely unlikely to happen. This is due to the fact that if Tyga’s issue with appearing at the venue lies with him not being able to bring Jenner as his accompaniment, that is a problem that cannot be solved for another four years.

Speculation towards the pair’s rumored relationship began in early October, when the two were seen in close company at popular Japanese restaurant Kabuki, also located in Hollywood. While the pair were not seen even doing so much as holding hands, and their only sign of physical closeness was that they sat side-by-side at said restaurant, sources close to Tyga were adamant to the media that the pair were dating. They were incredibly quick to relay the information that the two were not engaged in an intimate relationship in any manner whatsoever, however, due to both the large age gap and the fact that Jenner is underage herself. They have also been seen at various events together since then, including the birthday party of fellow rapper and Kardashian boyfriend (that of youngest sister Khloe) French Montana. Said party allegedly resulted in the unhappiness of middle sister Kim Kardashian, who sources say believe her half-sister is violating the code of not getting involved with the exes of people you claim to be close to. In that, the reference is towards Tyga’s ex Blac Chyna, a woman whom Kim is very close friends with and who has spent an inordinate amount of time with the family as a whole over the years. Mrs. Kanye West is said to be of the opinion that Jenner’s even rumored romantic involvement with the rapper is disrespectful to their family friend, and that the two of them hanging out whatsoever is simply unacceptable and somewhat backstabbing.

It remains to be seen whether Tyga’s appearance at Greystone Manor will end up being rescheduled. For the time being, however, the rapper is said to not be interested in pursuing the matter any further.