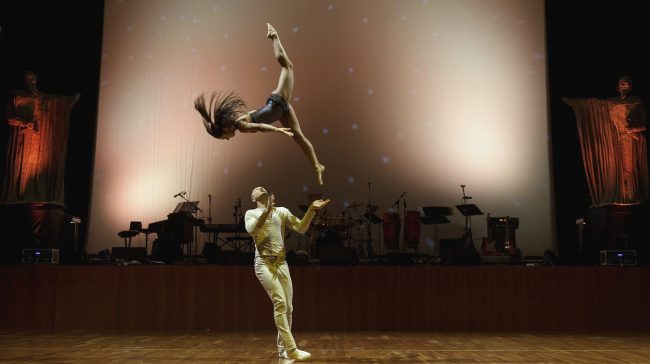 Acrobat team Duo Flame turned their talents into an epic dance routine on the TV show Ukraine Has Talent, shocking the audience with their amazing moves. Aiusha Khadzh Khamed, 22, began doing gymnastics at the age of four, but it was not just gymnastics training; it came with an artistic twist. Born in the Ukraine, when Khamed was just 13, her family moved to Spain where she met a coach who guided her in the art of artistic gymnastics. By the age of 18, she had won many championships and moved back to the Ukraine to attend the National Olympic University to officially make this her career. Quite an impressive background, and joining her talents with those of Vladyslav Ivashkin, make this partnership so much more than just a pair of acrobats.

Ivashkin was also born in the Ukraine and is just four years older than his Duo Flame partner. His father and mother gained acclaim in two very different sports – his father is a wrestler and his mother, a gymnast. He was older than Khamed when he began being coached by his mother in the art, and at just seven years old, he learned the basics of acrobatics. His first competition was at the tender age of nine – which he won – and that led to training with one of the best coaches in the Ukraine. This amazing couple each won gold medals; his in the Ukraine and hers in Spain, for their acrobatic gymnastics. By the age of 18, he became an artist performing on stage with the circus.

Looking at their website, it is unclear how the two of them met, however they have been performing together since 2011. Fans may not know how they met, but they are surely glad they did. Performances in China and Korea began their journey until they ultimately ended up on Ukraine Has Talent in 2013. They did not win, but they did achieve a finalist status, and the video below is of one of their most viral videos from that show. Their strength and agility cannot to be compared to either a dancer or an acrobat, but seems to be a category all their own. Since the show, the dynamic duo has gone on to perform in iconic venues around the world. They were a part of Cirque Dreams in Mexico, Gala shows in Germany and even spent some time performing in Australia from 2013 to 2014. Cannes, France; Tokyo and China round out the places Duo Flame has performed in to date, and fans in the United States are hoping they will come to the states one day.

Duo Flame has well over 20 videos on YouTube, with millions of views – many of those views coming from their acrobatic performances on the Ukrainian talent show. The video below alone has over five million views, and is a stunning performance full of strength and agility which many have never seen before in the genre of dance. The choreography is stunning in its simplicity, beauty and elegance, and these feats of strength transferring seamlessly into dance is a pleasure to watch. Duo Flame is the power couple to watch for in the future, as they have a huge and dedicated fan base, and they contribute so much to the art of acrobatic dancing that they will surely be around for a long time.