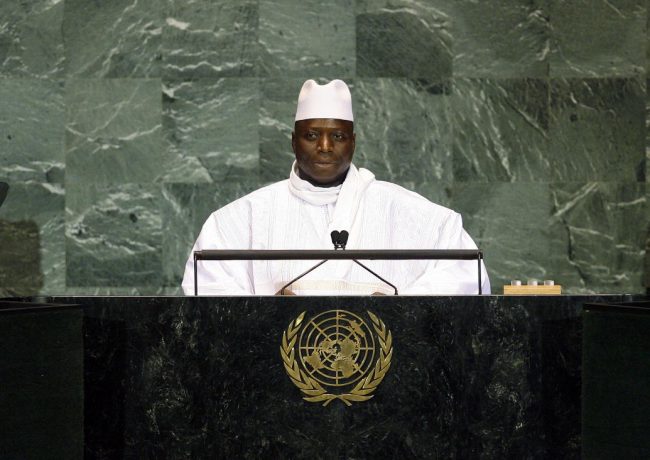 Overnight, according to reports of a potential coup attempt, gunfire was heard in the Gambia capital of Banjul. There were also reports Tuesday that there had been an attack on the presidential palace in the West African nation.

The longtime ruler of the nation, President Yahya Jammeh, rose to power after a 1994 coup. During the alleged attack, it was reported that he was out of the country visiting France. However, the actual location of Jammeh is in question. French authorities say there is no record of Jammeh entering France.

As one of the smallest countries in Africa, the nation of Gambia is a former British colony that is surrounded by the country of Senegal to the south, north and east. The capital of the nation, Banjul, is on an island, sitting at the mouth of a river on the coast.

Reports from various news agencies are saying the gunfire heard was potentially linked to a mutiny or attempted coup in Gambia. It is believed that there were troops from the presidential guard involved in the events, but that has yet to be confirmed.

On Tuesday, businesses and banks remained closed and there were reports stating that the state radio station made no comments about any shootings and just continued playing music as if nothing was going on. Access via a bridge to the city center was said to be blocked by troops.

A mutiny or coup has been denied by authorities. The head of the Civil Service, Kalidu Bayo stated to the Associated Press that there are rumors circulating, however, there is no coup taking place. He stated that in Gambia, there is only peace and calm.

According to military and diplomatic officials quoted by Agence France-Presse, there was actually a coup attempt that took place and it was foiled. The report continued to say that the three conspirators attempting the coup have been killed. Included in the three killed is allegedly an army deserter, who was believed to be the leader of the attempted coup.

President Jammeh has seen an increasing level of criticism from outside of Gambia. The criticism most heard is for his running a repressive state. Gambian authorities were criticized earlier this year by Amnesty International for changing the country’s constitution to lengthen jail terms from 14 years to life in prison for some categories of homosexuality.

The Amnesty International report from November of this year stated the changes in Gambia came at a time when citizens are seeing free speech rapidly shrinking. This is shown in media restrictions, where the government is in control of broadcast and print media.

The recent reports of gunfire and an alleged coup attempt come a couple months after a Burkina Faso demonstration protested President Blaise Compaoré’s plan to lengthen his time in office which was already 27 years. Compaoré’s fled to the Ivory Coast during the collapse of his government. During the collapse, Lt. Col. Issac Zida took control of the country until a interim president could be named.

It is unclear if the gunfire heard was part of an alleged coup attempt in Gambia, or if any coup or uprising took place. Current whereabouts of President Jammeh are still unknown, and this appears to be a developing issue growing in the West African nation.