By Crystal Boulware on December 7, 20143 Comments 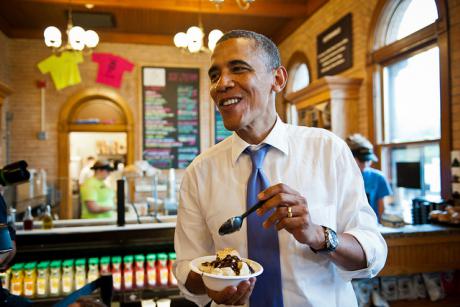 During the peak time in the political season is no time to get a new diagnosis, but nevertheless gastroesophageal reflux disease seems to be affecting Barack Obama’s health, according to a diagnosis made late last week. According to sources Obama visited Walter Reed National Military Medical Center for treatment of a sore throat that had lasted over several weeks. Tests that he underwent confirmed that Obama had inflammation in his throat caused by gastroesophageal reflux disease.

Also referred to as acid reflux disease, Gastroesophageal reflux disease is a common condition where acid produced by the stomach moves up into the esophagus. This condition is often caused when the LES, or lower esophageal splinter does not close once food has passed through it or is opened too often. When the LES does not function as it should acid build up can often cause basic symptoms such as heartburn, nausea and a sour taste. Doctors determine that the main causes of gastroesophageal reflux disease are simply things like eating large meals, snacking before sleeping, eating spicy or fatty foods, etc. However, acid reflux disease can also be caused by a hiatal hernia, which is a problem with the LES and diaphragm.

Though doctors at the hospital where Obama was seen believed that it was only his diet that was to blame, they quickly took him to get a variety of tests to make sure that everything was normal. A White House representative said that the test was not urgent, but convenient for President Obama. Because causes of acid reflux can be things like eating spicy foods, eating a lot of food, smoking, and drinking, Obama’s health affecting diagnosis with gastroesophageal reflux disease was a joke to many, as they began to laugh about what matters Obama might be doing behind the closet door, so to speak. Though Obama has admitted to being a smoker in the past, he supposedly uses Nicotine gum to resist the urge. It has also been known that Obama enjoys spicy food and supposedly has an occasional beer. However, acid reflux disease is actually no laughing matter.

Though it seems like such a simple disease to cure, antacids do not always work and some symptoms of gastroesophageal reflux disease can be severe. If not treated, acid in the wrong parts of the body can lead to damaging results.

However, most people are able to get treatment for the disease, even if treatment is as simple as controlling diet and medications. With Obama’s elite team of doctors, and people being in charge of his care from day-to-day, his treatment should be simple and effective. If his gastroesophageal reflux disease is not controlled however, there are also surgical treatments that can be done without much hassle, such as the LINX device which has been known to be effective for patient health. The LINX is a magnetic ring of titanium beads that closes the LES to keep acid from raising into the esophagus.

For now, reports state that Barack Obama will be fine, despite his diagnosis with gastroesophageal reflux disease that was affecting his health. Treatment suggests that he keep a close watch on his diet, meaning that his trip to New Delhi in January might be less entertaining. Drinking, smoking, and eating Indian food might also make for a life less entertaining, meaning that Obama may just have to take up more hobbies besides his avid love for golfing.

The Times of India
Forbes
WebMD