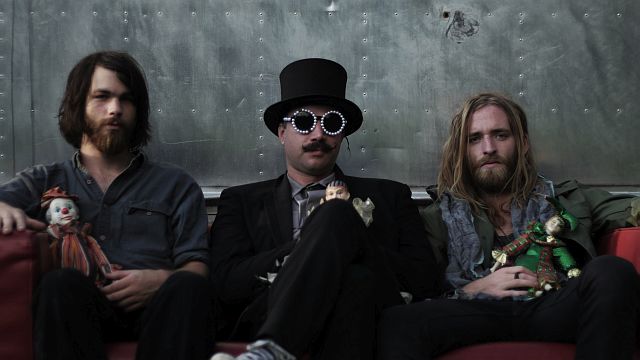 i am Love is coining a new term for their type of music and their artistic sensibility. “Folkster” looks like a combination of folk and hipster, and gels perfectly with the new rash of folk-inspired indie bands such as Mumford & Sons, Kings of Leon and Fleet Foxes. i am Love’s vocalist and zither player, Joshua Christopher, would like the term to be a bit more expansive. The band, he says, has dedicated itself and its new nomenclature to the idea of using any and all tools available to create inspiring art or music. In the case of i am Love, these tools include lots of old Americana instruments such as the afore-mentioned zither, banjo, saxophone and a very unique voice.

i am Love’s first full album, a self-titled work, will be released in mid-January 2015 and they have done a limited tour in support of it, though there are more dates to follow. They released an EP prior to this full-length album in 2012 and have garnered quite a lot of attention in between releases while touring. They played at two of the country’s largest indie music festivals, SXSW and New York’s CMJ Music Marathon, and they are known for their ethereal and warm live shows. Their cult following has even extended to mega film director James Cameron, who directed their first video for the single Stitching on our Wings.

The members of i am Love look the way one would expect musicians who came up with the term “folksters” would. Christopher has a very curly waxed mustache and relishes his steampunk regalia, while bass and banjo player Will Whitmire and keyboardist and percussionist Kris Jackson sport the requisite full beards. Also requisite to the band is a distinct love of all things folk, as their base sound is layer upon layer of classic American folk music from all different eras.

This attachment to folk comes in part from Christopher’s growing up in a rural area outside of Philadelphia which is rich with folk music and folk art tradition. He seems to genuinely seek to honor the rich pre-jazz and pre-rock musical history of the mid-Atlantic states, as he, Whitmire and Jackson weave haunting melodies and folk rhythms through all of their songs. In their first singles from the new album, Ghost in the Hallway and Pillar of Salt, this homage to early folk is so palpable, listeners will almost hear the wind whistling through the long grass and over the low peaks of the Adirondacks. In this context, fans will be able to see that the term “folksters” is less about a trend and more about a true reverence for the early music and art cultures which were an integral part of the evolution of American music.

Another element to i am Love which makes them unique is Christopher’s incredibly interesting and nuanced voice. He seems to be able to change timbre, inflection and vocal texture with each track, sounding a bit like Modest Mouse’s Isaac Brock on one track, like Tom Waits in another and Morrissey in yet another. These are just vain attempts at description, however, as Christopher’s vocals really do not sound like any other singer and would be almost impossible to replicate. On top of being so different, they lend an incredible versatility to the band’s sound and allow them to layer on modern indie genres such as early college radio, experimental electronica and ensemble production to their “folkster” base. With the rich, deep tones of early folk and Christopher’s ever-changing voice as distinctive base notes, the band is free to experiment with any top notes that catch their fancy.

Distinctive yet versatile, mired in tradition yet experimental, i am Love truly lives their credo of being as creative as possible at all times while honoring those who came before them. Joshua Christopher’s unique voice puts him on par with Tom Waits as a genre-defining vocalist. In true folk tradition there is also a great storytelling aspect to the lyrics of each haunting and nuanced song, making their impending album one of the most exciting prospective albums of 2015.

Pillar of Salt and Ghost in the Hallway are available to stream on i am Love’s Soundcloud page. Ghost in the Hallway also has an accompanying video, released on the band’s Youtube page. Their first EP is available for purchase on their Bandcamp page.  All links are listed below in “Sources.” i am Love will be touring again in 2015 to support the full-length album, which will be available for sale via the band’s website on January 15.