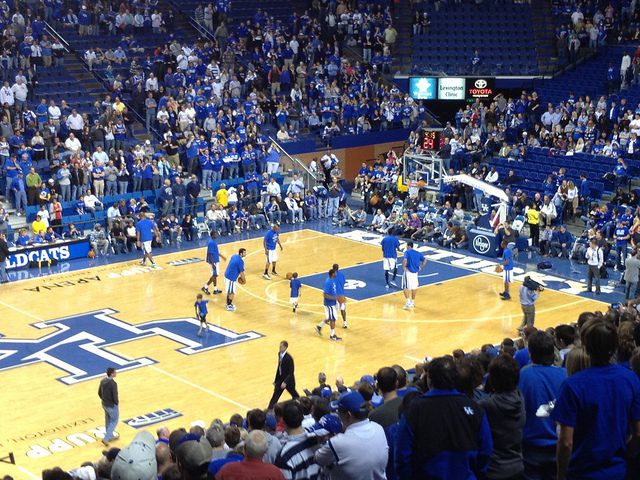 In a huge matchup of traditional college basketball powerhouses, University of North Carolina traveled to Lexington to take on number one ranked Kentucky. The Wildcats got a dominant win by a score of 84-70 in what might have been their best offensive performance of the season so far. North Carolina showed flashes of being able to compete, and their star Marcus Paige had a good offensive game, but the Wildcats were too much for them on both sides of the ball.

Both teams have had some big non-conference matchups early in this college basketball season. North Carolina has beaten UCLA and Florida, who were ranked when the tar heels beat them but are no longer, but have suffered surprising losses to Butler and Iowa. The Wildcats have taken care of all comers so far and have yet to have a really tight close game. Big wins over top-10 ranked Kansas and Texas have been their most impressive wins to date. Coming into this matchup Kentucky have lived up to, if not exceeded their extremely lofty expectations coming into the season and are ranked number one in the nation accordingly, while UNC’s early losses have dropped them to a 21st ranking.

The first half opened with Kentucky getting out to an early lead dominating the Tar Heels on both sides of the ball. The Wildcats defense really created problems for UNC early and it kept them from ever really getting close. North Carolina had some good stretches where they seemed to have figured out the Kentucky defense. They were able to cut the lead to three points midway through the first half, but the Wildcats always had an answer.

Aaron Harrison’s three-point shooting gave Kentucky a big run late in the first half and Rupp Arena was going crazy for their talented team. Even with the recent injury to starter Alex Poythress, Kentucky did not seem to lose a step and their chemistry on the floor did not seem affected by the loss of the veteran. Their first half performance may be the best they have given all season to date on the offensive side of the ball, and it led to them taking a 49-34 lead into halftime.

After the halftime break Kentucky continued to pile on the points to add to their lead. A good sign for the Tar Heels in a crushing loss was the play of Marcus Paige who has not yet played like himself in this young season. Paige’s offense really picked up in the second half hitting some big threes and looking more lively with and without the ball. About midway through the second half, UNC started to make a couple runs to cut the lead. Whenever they did, the Wildcats just turned it around and extended their lead.

The game was never really closer than a 10-point Kentucky lead the entire second half ,with the Wildcats applying their usual defensive pressure and getting a lot of easy buckets in transition. The Wildcats’ best player on the night had to be Willey Cauley-Stein who stuffed the stat sheet with 15 points 6 rebounds 2 blocks and 4 steals. His effort on the offensive and defensive side really led his team to this big early season victory. Aaron Harrison and Devin Booker really played well offensively as well spreading the floor with their outside shooting.

North Carolina will have some easier games coming up to try to regroup and improve upon this loss. Even though the score showed Kentucky’s dominance, it should not be all negatives taken away from this game for the Tar Heels. They showed flashes of how good they can be. Before ACC play starts, the Tar Heels will have one more high-profile matchup against Ohio State to prove they can be a contender.

Kentucky will have two more very tough non-conference games against UCLA and Louisville before SEC play starts. Moving forward without Poythress will be a challenge, but if any team in the nation has the talent to fill the gap of a player the caliber of Poythress it is definitely Kentucky. It is still very early in the season, but the dominance the Wildcats have shown added to how weak the SEC is this year has people saying this could be a team that could go undefeated through the entire season.

The Kentucky Wildcats got an impressive win over North Carolina in Lexington by a score of 84-70. It was another performance by the Wildcats that highlighted their defensive dominance, but they also played extremely well on offense with nearly everyone in the rotation getting big points at some point.