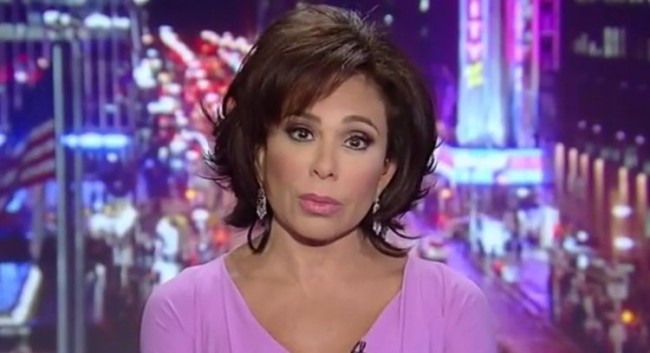 Fox News host Judge Jeanine Pirro made some incendiary comments when she said that minorities and minority communities should be more respectful to police and undergo sensitivity training. She also lashed out at President Barack Obama for race baiting and perpetuating a racial divide. She lambasted the president for “stoking the flames” and promoting divisiveness, resentment and racial hatred.

Pirro inquired as to the reason why Obama is heard from only when minorities die. She went on to cite public responses by Obama in the death of Michael Brown in Ferguson and photojournalist James Foley, who was beheaded by radicals ten days after Brown’s death. Reportedly, Obama sent a White House official to Brown’s funeral, but sent no one to Foley’s memorial service.

Pirro brought up cases where Obama seemingly took sides almost immediately against law enforcement. In all of those cases, the suspect was reportedly black. Judge Pirro went further, probing as to why minorities were not taught to be more respectful towards authority and provided instruction on how to obey lawful orders from police like they should in place of threatening federal civil rights investigations. Allegedly, Obama was going to reverse the Trayvon-Zimmerman case with a federal investigation. That did not come to pass.

Pirro berated Obama over establishing credibility for race profiteers like Rev. Al Sharpton and making the recent cases about minorities. She blamed the president for not tackling the real issues of low education, the poverty rate of black Americans, criminal behavior and broken homes. She reminded Obama that he was elected by a collective which included blacks and whites.

The barrage came after Pirro posed a question to viewers asking them to chime in on whether officers needed retraining to be sensitive to minority communities. As she posed her question, Pirro made air-quote gestures with her hands when saying minority. Pirro was wrapping up another episode of Justice with Judge Jeanine when she read the results to the poll conducted by Fox News. Not surprisingly, she stated that the majority of the poll results were in favor of police.

While some agreed, the majority of the responses were against retraining. Many said that offenders need to stop breaking the law and resisting arrest. One viewer wrote that Garner’s death would not have happened had he been white. Pirro disagreed, citing the fact that in the video a black officer is also present.

One viewer named Jordan claimed that it was racial profiling. Pirro disagreed, providing her definition of racial profiling as opposed to offender profiling. She went on to agree that it is the public – the community – which needs training in police relations.

Recent protests have broken out around the country in response to the deaths of Michael Brown and Eric Garner. Both died at the hands of police and both were unarmed. Both officers involved were not indicted by a grand jury on charges of police brutality and excessive force, causing protests to reach a fever pitch. Former prosecutor and judge Pirro closed out her show by dismissing the racial undertones of recent questionable killings by police. Judge Pirro said that it is minorities who should be more respectful to police instead of being lawbreakers.