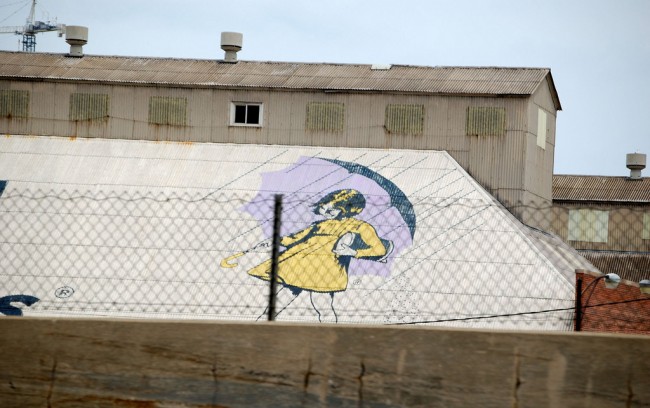 A partial wall collapse at a Morton Salt facility in Chicago proved it does not always have to rain to pour, despite the company’s famous slogan on a sign on the building’s rooftop, as hundreds of pounds of salt spilled out and engulfed cars at an adjacent Acura dealership. There were no reports of anyone being injured in the massive salt spill.

The Morton Salt company is celebrating its 100th anniversary this year. The Chicago facility where the salt spill happened is used to store salt and ship it out across the entire United States.

According to Morton Salt spokesperson, Denise Lauer, the collapse of a side wall of their “storage facility on Elston Avenue in Chicago,” happened on Tuesday afternoon sometime around 2:00 p.m. She said that further details will be provided “as appropriate.” Though there was not a rain cloud in the skies, salt poured forth from the side wall, prompting even the Chicago Fire Department to respond to the disaster.

Chicago Fire Department spokesman Larry Langford stated that the collapse of the wall appeared to be caused by either too much salt putting force against the wall, the wall’s condition, or possibly a combination of these two factors. The office of news affairs at the Chicago Fire Department tweeted about the salt spill that occurred at the Morton Salt company facility at approximately 2:15 CT.

Denise said that the type of salt that poured out of the Morton Salt company building was not table salt, but road salt, the kind used on icy roads in the wintertime. Though the hundreds of pounds of salt partially buried several cars in the Acura sales lot, much of the substance can probably be salvaged to use whenever the next snowstorm hits around the country to help ensure safe driving conditions for motorists.

The vehicles that were in the path of the salty onslaught, six to eight cars belonging to customers and waiting to be serviced, however, did not fair so well. Many of the parked cars at the McGrath Acura dealership of Chicago were damaged as the salt slammed into them. The exact extent of the costs that will be involved in cleaning up the spill and in the damages that the cars suffered have not yet been calculated.

Official representatives of the McGrath Acura dealership have not, so far, responded to requests for comments about the massive salt spill. They are expected to issue a comment in the near future.

Morton Salt Inc.’s slogan is “When It Rains, It Pours,” but it is unlikely that the company will ever use photos or other images of salt pouring forth from the collapsed wall of their Chicago, Illinois storage facility to advertise their product. The customers whose cars were damaged by the avalanche of salt might have a difficult time trying to get their insurance companies to cover the repair costs, as it might be hard to determine if the spill was more an act of God or an act of man.