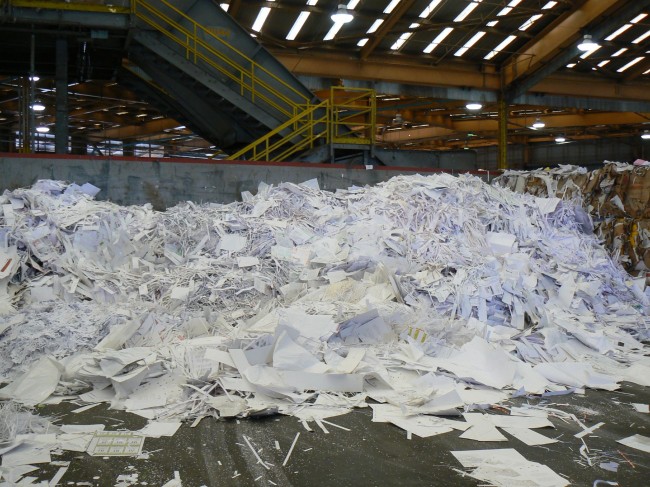 Business information is often disseminated through the use of printed materials. It has been determined that up to 90 percent of all business information, even such data that is used only for a very limited time, is still printed out on paper. In fact, many times the data is read only once, doing nothing to promote sustainability or alleviate waste. Recently, though, chemists from the University of California have created a rewritable paper that could conceivably reduce waste.

The so-called paper uses the unique color changing properties of chemicals known as redox dyes. Redox dyes in conjunction with ultraviolet light creates rewritable text on film. Using commercial redox dyes, the film paper currently comes in a choice of red, blue or green. When ultraviolet light is applied through text, the light reduces the dye in the negative spaces to a colorless state. This leaves the printed text and images viewable in whichever color the original film began.

The text is retained on the film for days and either returns to the natural state on its own or, if need be, can be erased more quickly simply by heating the film. The film paper retains text for several days before losing legibility so it lends itself to such things as meeting handouts or newspapers and, as such, could reduce the amount of waste that these materials create. No additional dye application is needed between each use so no additional resources are required. Currently, the film can be reused for about 20 times before degrading.

The chemists working on the project are now in the process of coming up with ways to extend the life of the film. They believe that the rewritable paper will soon be able to be reimaged at least 100 times. The process is touted to be simple and have low production costs as well as boasting a low energy output. Additionally, the team is working to extend the lifetime of the legible text for longer than the current three day viewing cycle. If they are able to extend the legibility timeframe, they hope to be able to expand the marketability and potential usage base for the product.

The text or images can also be erased at any time. While returning the film to the original unmarked state requires heating, the chemists involved in the project give assurances that the heat cycle poses no problem. The rewritable paper needs to be heated to a temperature of 115 C but even conventional printers already heat paper to 200 C in order to make the toner bond to paper. In fact, the UCR lab is also working on creating a regular paper variant of the technology.

This innovative rewritable paper product came about from research that was funded by the U.S. Department of Energy. At this time, a provisional patent is on file and the Office of Technology Commercialization at the University of California, Riverside is actively searching for a business to license and utilize the technology. If successful applications are found, the rewritable paper could manage to reduce waste, lessen deforestation and increase both environmental conservations and boost global sustainability.

One Response to "Rewritable Paper Could Reduce Waste [Video]"