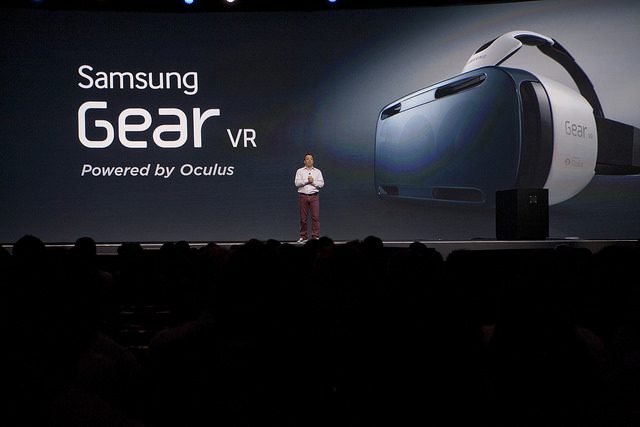 Samsung Gear VR Innovator Edition is now selling in the United States, both at Samsung and AT&T websites. Samsung’s first virtual reality powered by Facebook’s Oculus, the Gear VR is set to deliver an entirely new experience never seen before, with virtual video and games in an immersive environment. According to the Samsung’s official blog, Gear VR aims to inspire as well as to entertain.

The Gear VR is a headset offering fully 360° experience so that watching a movie with it feels like actually being in a cinema. The device was introduced in September, and for now, only works with Galaxy Note 4. It is regarded as a mobile system since it does not rely on a game console or a PC.

For now, Samsung Gear VR has 20 apps, mostly games. There will be more in the future with Samsung’s Milk VR, an upcoming service and the South Korean firm’s first VR app platform, which will have action, sports and music channels. Current Gear VR users have the Oculus Store to download apps from.

Oculus for the headset and Samsung for the smartphone is an excellent combination. Note 4’s 5.7-inch AMOLED quad HD plus super speedy performance, when working with the Gear VR produces a stunning visual and 360 immersive experience. This amazing blend makes users explore new worlds while enjoying a different kind of gaming.

As shared by Vice-President of Product Strategy and Marketing Justin Denison of Samsung Telecommunications America, the company is now putting the VR Innovator in the hands of user innovators so that everyone will be together in defining the new category of mobile. With Samsung Gear VR Innovator Edition now selling in the U.S., the South Korean OEM, the tech community and the developers will have the chance to receive feedback from VR enthusiasts, early adopters and content creators – then move on inventing.

Samsung Gear VR Innovator Edition brings the user to a virtual world, as if he is actually inside such world. The Gear refreshes displays quickly, about in 20 milliseconds, to avoid user motion sickness. The virtual reality tech heads towards the direction of “low latency” and “low persistence.” Gear VR’s operation is 60 hertz, meaning, it shows 60 images per second. It also puts 100,000 polygons on-screen at a time.

However, the device is not for everyone. It targets the developers who would like to develop virtual reality apps and games.

Since the Gear VR works only with the Galaxy Note 4 for now, Samsung needs additional engineering so that the VR will work with other mobile devices as well. The device package comes with a carrying case, lens cloth, SD card adapter, replacement face cushioning and a 16GB microSD card pre-loaded with start content at $199. It can also be purchased for $249.99 with a Samsung Gamepad. The Samsung Gear VR Innovator Edition is now selling in the U.S., at ATT.com and Samsung.com.

One Response to "Samsung Gear VR Innovator Edition Now Sells in the U.S."