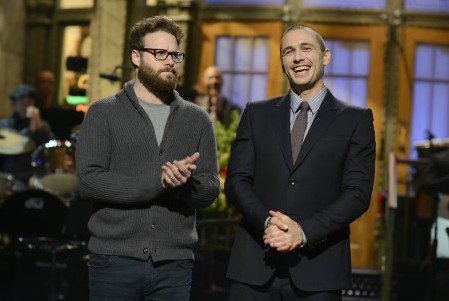 Just when it seems that Saturday Night Live has been shooting comedy blanks this season, James Franco shows up for his third time hosting the show and luckily for fans of the show, this was one of the funniest episodes this year. This is one time that the makers of SNL got almost everything right. Franco’s monologue may not have been hysterically funny, but the addition of Seth Rogen guaranteed that the audience would get a charge out of seeing the two “BFFs” together for an impromptu riff on the Sony leak.

Nicki Minaj was the musical guest and this clearly went over well with the studio audience but it does feel like Saturday Night Live is having a hard time finding musical guests this time of year. To give Minaj credit, she did a pretty good job in her comic sketch on the news update portion in the show. Although making fun of Kim Kardashian did feel a bit like shooting fish in a barrel. It should also be mentioned that the rapper read her cue cards, or auto prompter, better than the vast majority of the SNL cast.

The episode on Saturday actually managed to make the most of Nicki’s being the musical guest allowing her to interact with James Franco, in his third time hosting, as a part of the memory skit. A lucky, or unlucky, Franco, as the “brain guy,” gets stuck with Minaj who can only sing the first two lines of her song because that is all that Pete Davidson’s character can remember. This gag, was actually quite clever and it did make the most of all the scheduled em>Saturday Night Live guests.

By far the funniest skit of the night, despite featuring Aidy Bryant as the stand-in Tinker Bell, was the show’s spoofing of the live HBO Peter Pan event earlier this week. James Franco doing his Christopher Walken impression of the star playing Captain Hook was very funny. So was Cecily Strong’s take on Allison Williams in the same show. Granted, imitating Chris Walken is a guaranteed giggle, but this particular moment was comic gold with everyone hitting their stride, except for “Tonker Bell” who was just annoying and not really funny, the gag of shaking fairy dust off her a** just missed the comedic mark.

Saturday Night Live does deserve kudos for teaming their surprise guest, Seth Rogen, with his BFF in the last skit of the night. Although to be fair, Rogen showing up was not too much of a shock as he and Franco are practically inseparable. The two were together for the final sketch of the night with Rogen “playing” James Franco in an advert about yachts, pronounced “Yakts” throughout the commercial, and this was a good one for the episode to go out with. The really surprising thing about Seth Rogen’s appearance in this was his lack of glasses. It it not often that he appears sans spectacles and it did seem odd.

James Franco coming back for a third time was either lucky or inspirational for the writers and cast of Saturday Night Live as this was easily one of the funnier episodes of the year. It was also the best use of a musical guest star, since Miley Cyrus. Although it was a shame that Nicki Minaj was filling that space, her Kim Kardashian spoof was pretty good, it just did not tickle that funny bone quite like Franco’s Walken, which is in the following video courtesy of the SNL YouTube channel. Enjoy.