Seahawks They Came They Saw They Dominated 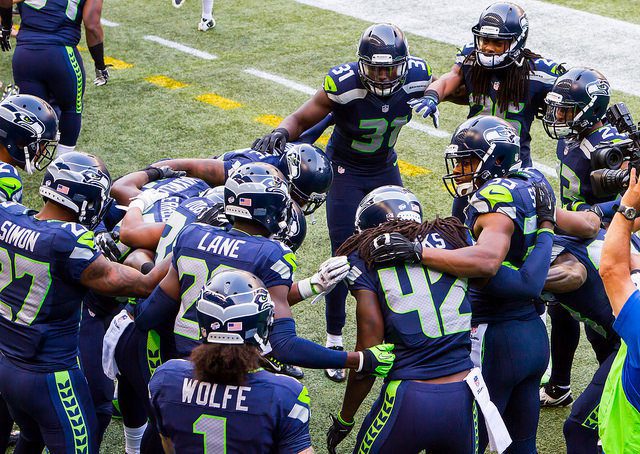 Heading into week 16, the marquee matchup in the NFL was the Seattle Seahawks on the road facing the Arizona Cardinals. The Cardinals were sitting firmly in first place of the division, and atop the conference most of the season. Things started to get rough for the Cardinals in the last few weeks, and their lead on the division had slipped to just one game. If Arizona wins, they lock up the number one seed, and home field advantage throughout the playoffs. The game was hyped as a battle between the two best defenses in the league. Seattle went to Arizona and showed the league why they are the defending Superbowl champions. They went down to Arizona, they saw their chance, and they dominated every facet of the game.

The first half of the game looked very much like the defensive battle that it was billed to be. Neither team was able to put up points in the first quarter. In the second quarter, the Seahawks were able to score late, and the teams went into the half 14-3, Seahawks lead. The Cardinals came back strong in the third, and were able to shut out the Seahawks again. Unfortunately, third string quarterback Ryan Lindley was only able to lead the offense to a field goal, 14-6.

In the final quarter of the game, the Seahawks flipped the switch and were done playing around. On the Seahawks opening drive they scored in under 3 minutes. Russell Wilson hit Luke Willson for a 20 yard touchdown, Willson’s second of the game. After stopping the Cardinals at midfield, what was no doubt the play of the game happened.

Back in 2011 when the Seahawks played the New Orleans Saints in a playoff game, Marshawn Lynch broke free for a 67 yard touchdown, breaking 8 tackles, and literally causing an earthquake in Seattle. On just the second play of the Seahawks drive, Lynch broke out another run for the highlight reel. After breaking free from the line of scrimmage, he was off to the races. He shrugged off a defender, and was able to keep his feet in bounds. After beating another defender, Lynch leaped into the air, turned around and did the same exact pose from that famous 2011 run for the score. A 79 yard touchdown run, was the longest of his career, and put the Seahawks up 28-6.

With the Cardinals getting desperate, they had to rely on the air attack. Lindley had never thrown a touchdown in his career coming into the game. Looking to get his team back in the game, he threw the ball deep; only to be intercepted by Richard Sherman. Sherman recorded his 24th interception in his four-year career, most in the league.

With under five minutes left in the game and once again in the red zone, Wilson took matters into his own hands. On second down, he rolled out of the pocket looking to throw, but no receivers were open. Wilson stiff armed a defender to the ground and ran the five yards for the touchdown, Seahawks up 35-6.

The match up was between two of the best defenses in the league, but Seattle was able to set a franchise record for total yards, racking up 594. Seattle, despite all the ups and downs of the season, are now in great position to get back to the Superbowl once again.

With just one game left, the Seahawks are almost in complete control of their destiny. If they beat the St. Louis Rams at home next week, and barring a tie from Green Bay and Detroit, they will once again be the number seed. The home field advantage the Seahawks have in Century Link field is something that cannot be replicated, or even put into words. The Seahawks play every game as if it’s a championship game, and next Sunday will be no exception, because in many ways it will be. The Seahawks would love nothing more than the road to the Superbowl to once again have to go through the Pacific Northwest.

One Response to "Seahawks They Came They Saw They Dominated"