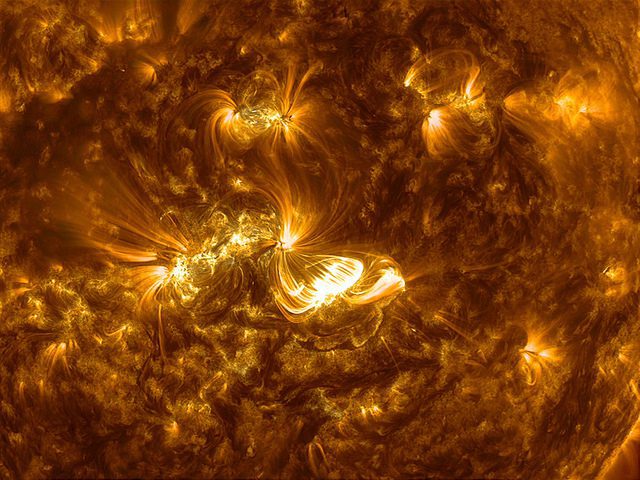 On Friday, following days of intense solar storms, the Sun fired a massive solar flare, triggering radio blackouts across Earth in Australia and the South Pacific. The flare was classified as an X1.8 event—one of the most intense types of solar flares—and was captured by NASA’s Solar Dynamics Observatory, which watches the fiery ball around the clock.

According to the Tech Times, the flare occurred in sunspot Active Region (AR) 2242, signaling the possibility of further storms in the region. The event was preceded by days of intense solar storms on the surface of the Sun, with two smaller—though still powerful—solar flares in the sunspot region known as AR 2241, and more blackouts are expected, according to the Space Weather Prediction Center.

Solar flares are classified by measurements of comparative intensity, A,B and C being the most common and least intense types of flare. M designates flares of minor to moderate severity, and X-class flares are the most extreme. The most severe solar flares are X20 type flares, which are less common and capable of much more interference on Earth. The most severe sun flare ever recorded was at least an X20-class, which occurred April 2 2001 in AR 9393. It is thought to have been larger and more powerful than earlier contenders, like an X20 flare in August 1989, or the famous X20 flare on March 6 1989, according to NASA’s Solar and Heliospheric Observatory.

The massive flare was followed by a proton event hours later. During a solar proton event, particles become hyper-energetic and crash into detectors of electronic equipment, causing “snowstorms,” or severe electrical disruption of equipment in space. The flare, however, was not directed at the Earth, so its effects on GPS, radio and electronics on the planet were severely diminished from flares of lesser intensity aimed at the planet.

Solar flares are sudden, intense variations in brightness caused when magnetic energy in the atmosphere becomes concentrated until it is finally released in electromagnetic outbursts. Flares can last minutes or hours and the radiation from these outbursts is emitted across the electromagnetic spectrum, from wavelengths to x-rays and gamma rays. The energy released by a single solar flare is comparable to the energy of millions of 100-megaton hydrogen bombs simultaneously exploding.

Sunspots are areas where the concentration of magnetic flux is highest and where the surface appears darker. As the Sun rotates, groups or pairs of sunspots of opposite polarity move together across the surface. Typically, solar flares happen in three stages. First, the precursor stage triggers a release of magnetic energy. During the impulsive stage, electrons and protons are accelerated and radio waves, x-rays and gamma rays are emitted. During the decay stage, a buildup and decay of soft x-rays can be detected.

The corona is the outermost atmospheric layer, around which light is visibly concentrated at the equator in bright loops that connect the active regions within. Active regions contain sunspots, and are where the solar flares are released. The first solar flares recorded occurred in 1859 when Richard C. Carrington and Richard Hodgson—both scientists—noticed a massive flare of white light while observing sunspots independently.