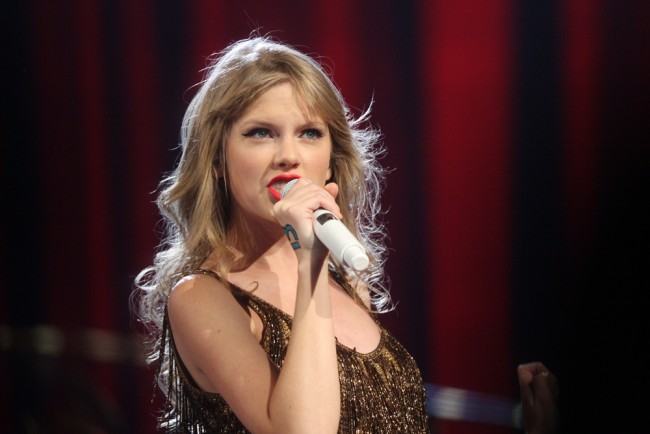 Taylor Swift, 25, reclaimed the number one spot on the Billboard chart with 1989, despite a very strong debut showing by The Pinkprint, the latest album by rapper singer Nicki Minaj. While 1989 continued to steamroll its competition by selling a total of 375,000 sales units, The Pinkprint‘s 244,000 total sales units landed it at number two on the charts.

It is little surprise that 1989 captured the top spot once again, as the Taylor Swift album has now been at the top of the charts for six out of the eight weeks it has been in release. Billboard counts songs that have been streamed and sold individually now in its calculations, with 1,5500 online streams now equaling one album unit and 10 songs sold counting as one album unit.

This past week, according to figures from Nielsen SoundScan, 1989 sold 331,000 physical copies while 433,000 songs were downloaded by Swift fans. Though the album was not streamed at all, as Taylor Swift is protesting against sites like Spotify that steam songs, the downloads combined with the physical album copies sold collectively totaled 375,000 sales units.

Counting the sales of 1989 from the past week, the album has now sold approximately 3.4 million copies. This makes it the year’s second-best selling album, coming in only after the Frozen soundtrack, which is still seeing strong sales, having sold 3.46 million cpoies in 2014. 1989 might beat it the final week of the year.

Many music critics had predicted that The Pinkprint would debut in the Top Five, but not as high as the number two spot, which they predicted that the Pentatonix album, That’s Christmas to Me, would occupy. That album dropped, though just barely, into the third spot on the Billboard charts, with a total of 214,000 album units sold. The Pinkprint beat out That’s Christmas to Me largely due to the 16.8 million song streams fans listened to and downloaded.

The album that occupied the number one spot last week, 2014 Forest Hills Drive by J. Cole, dropped into the number four spot selling a combined total of 135,000 sales. Debuting in the number five spot after an absence of 14 years was Black Messiah by the R&B singer D’Angelo and the Vanguard. It accomplished this feat by selling a total of 117,000 album units.

Though Nicki Minaj’s past two albums, Pink Friday from 2010 and Pink Friday: Roman Reloaded from 2012, entered into the Billboard chart at number one, The Pinkprint‘s sales were very impressive, especially as it went up against the Taylor Swift juggernaut of 1989. If Swift did not have an album out at the same time, The Pinkprint would likely have entered the Billboard chart at number one.

Eight of the Top Ten albums, according to Variety, had sales of 100,00 or more copies. Besides the albums already mentioned, In the Lonely Hour by Sam Smith, at number six, sold 102,000 copies. Four, One Direction’s latest album, was in the seventh spot this past week, with a combined total of 101,000 album units sold. At number eight was Ed Sheeran’s hit album, X, with 100,000 albums sold.

The ninth spot on the chart was occupied by Man Against Machine, by Garth Brooks. While it did not reach 100,000 or more copies sold, sales of the album were up from last week by 26 percent. It sold 81,000 total albums. At number 10 was Rock or Bust, AC/DC’s latest effort, with total sales of 76,999 copies.

Only one other musical act has had four consecutive studio albums at the top of the charts for six or more weeks. The group which accomplished this was The Kingston Trio. There have only been four other albums since 2008 to hold the number one spot for six of more weeks. Those albums were I Dreamed a Dream by Susan Boyle; Recovery, by rapper Eminem; 21, by singer Adele; and, the soundtrack to Disney’s Frozen.

Whitney Houston still holds the record of being the only female musical artist to have her albums be at the number one spot for 46 weeks. Taylor Swift and Mariah Carey are tied for second at 30 weeks atop the Billboard 200 chart.

The Pinkprint by Nicki Minaj, by debuting at number two, made it the highest-charting album by a female rapper this year. By doing this, it beat out Iggy Azalea’s The New Classic, which reached number three in April.

Taylor Swift regained the number one spot on the Billboard chart with 1989, despite strong competition from albums like The Pinkprint by Nicki Minaj, That’s Christmas to Me by Pentatonix, and D’Angelo’s comeback album, Black Messiah. With 1989 continuing to be a huge seller, it might stay at number one well into 2015.