The Librarians: TNT Has a Doctor Who Type of Its Own 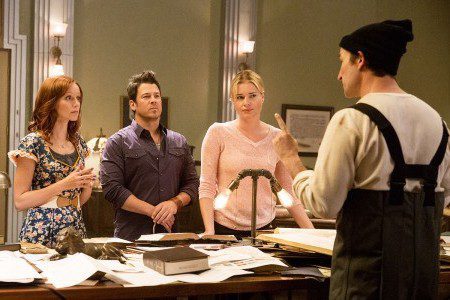 TNT has brought its own Doctor Who type to the small American television screen with The Librarians, a revisit to the TV movie verse that began in 2004 with the first film titled The Librarian: Quest for the Spear. Noah Wyle is back reprising his role as librarian Flynn Carson and Bob Newhart features in the show’s pilot as Judson, his character in the television movies. While Wyle made an appearance in the two hour long pilot, he will be an intermittent character in the series and the show promises to have some pretty impressive guest stars, one of which is Bruce Campbell.

The show brings Christian Kane back to the small screen in an adventure setting with elements of fantasy, a genre he does particularly well in. Lindy Booth, who could be thought of as a sort of scream queen after all the horror films she has done, is back in a variation of sorts of her Relic Hunter role (1999 – 2002). Rebecca Romijn hangs up her body paint Mystique costume to join the cast as the kick-a** guardian of the Librarians.

Jane Curtain reprises her role of Charlene, who welcomes Eve Baird, the new guardian and introduces her to Noah Wyle’s character. Matt Frewer (Honey I Shrunk the Kids, Orphan Black) is an uncredited big bad, and the American born Canadian actor proves that he can do an upper class British accent with the best of them. John Kim (who worked in the Australian soap Neighbours) is another of the new Librarians who has joined up as Carson’s possible replacement. TNT have pulled in a Doctor Who type of its own, albeit, one who is not a time lord and whose workplace is not a tardis but the shows do feel alike.

Watching the show’s pilot, the feeling is a mixture of a kids Saturday morning live action adventure show combined with that innate cheesiness that one associates with the older, and much beloved, episodes of Doctor Who around the time of Tom Baker’s wearing of the scarf. While the effects are much better than the old BBC shows, the feeling is much the same. The earnestness of the performers and their almost overacting does make it seem they do belong on a very child friendly schedule.

This sort of family entertainment has been missing for some time on television. TNT have provided this rated PG, or more accurately G, entertainment before with the TV movies featuring Judson (Newhart), Carson (Wyle) and Charlene (Curtin) in this fantastic adventure world of literary focussed heroes. This updating of the movies with the inclusion of Lindy Booth also feels like a riff on the fantasy adventure Relic Hunter with Tia Carrere. She, Tia, played a university professor and archaeologist who travelled the world as a female Indiana Jones and the show ran for three seasons.

Both Relic Hunter and The Librarians have that same earnest, rated G feel. The show’s season one opening has Bob Newhart exiting by the end of the two hour episode and introduces John Larroquette as Jenkins. Larroquette looks to be playing “to type” as the sort of obnoxious and pompous character that he specialises in. Overall, this new TNT series, The Librarians, does feel a little like Noah Wyle is an American type of Doctor Who that may not travel through time and whose verse has its own rules based more on literary learning versus a sort of all knowing alien type. The show does feel a little simplistic, but for those who enjoyed Relic Hunter, this will be a welcome treat. The Librarians airs Sundays on TNT.

3 Responses to "The Librarians: TNT Has a Doctor Who Type of Its Own"