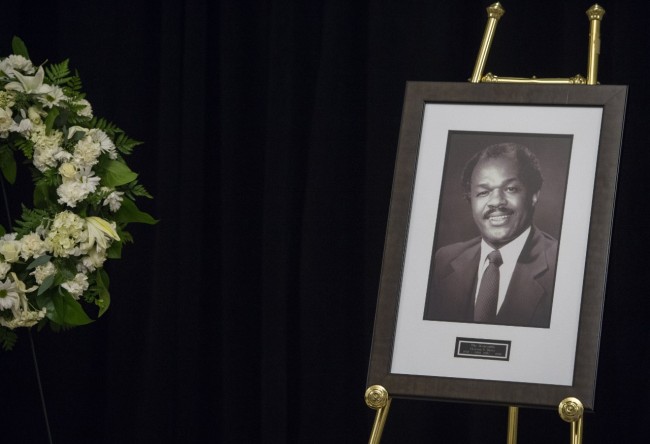 One day after thousands gathered to celebrate the life of the big time activist Nelson Mandela, thousands are now gathering to celebrate the life of a more localized activist, Marion Barry, as his services were held Saturday. Though Barry was an activist in his early years, many focus more on his political involvement as he was also Mayor of Washington D.C., elected to four terms throughout his lifetime. His death on Nov. 23 was not much of a surprise to anyone, as he suffered from many ailments over the years, but his life of 78 years was an inspiration to almost everyone and with the title “Mayor for Life” he was able to go out with a great celebration.

Saturday Dec. 6 marked the day for the end of Barry’s farewell services. Precessing Saturday, a marathon memorial service had started on Thursday, with a capstone Saturday that ended the spectacular events that took place over the three-day period in an effort to celebrate the life of Marion Barry. In the crowd was national dignitaries, dozens of clergy members, many political figures, and thousands of ordinary citizens who grew to respect the previous D.C. mayor.

Speeches were heard from many well-known figures and eulogies were delivered with ease. Rev. Jesse Jackson credited Barry with being a freedom fighter who rebuilt and freed Washington. Barry’s forth wife, Cora, contributed stories of her husband’s giving spirit, in which she stated that she quit asking him to do normal domestic chores, as he often gave money to people at gas stations or helped people in need at stores. The new mayor of D.C., Vincent Gray told stories of Barry’s fight for those with disabilities, as he worked to help them without tolerating any inappropriate behavior from them. Other speakers included Rev. Louis Farrakhan, Christopher Barry who is Marion Barry’s only son, real estate developer R. Donahue Peebles, and some D.C. residents, as well as many others.

The event took place at the Washington Convention Center. The three-days tribute, where thousands gathered for Marion Barry, ended with his open service Saturday at 7 a.m. Public viewing started off the funeral services, which was then followed by the large memorial celebration at 11 a.m. At 4 p.m. the crowd moved to the Congressional Cemetery where Marion Barry was finally laid to rest.

In his biography Mayor for Life: The Incredible Story of Marion Barry Jr., the former mayor had told of what he believed were his accomplishments and his struggles. He said that he tried to be an inspiration to many who were going through all kinds of issues. Though he had many run-ins with the law for problems like drugs, civil suits, tax evasion, traffic offenses and even reports of stalking, Barry’s actions for the better always seemed to outweigh his problems. As his three-day life celebration would show, people loved Marion Barry, even if he had problems.

As thousands gathered to pay tribute to the former mayor of D.C., Marion Barry, his services were finally rapped up, but as statements from those at the funeral reflect, his spirit will live on in the lives of those who take his attitude for changing the world and fighting for civil rights. Marion Barry will always be remembered as “Mayor for Life,” even in death.