White Christmas Could Be Elusive 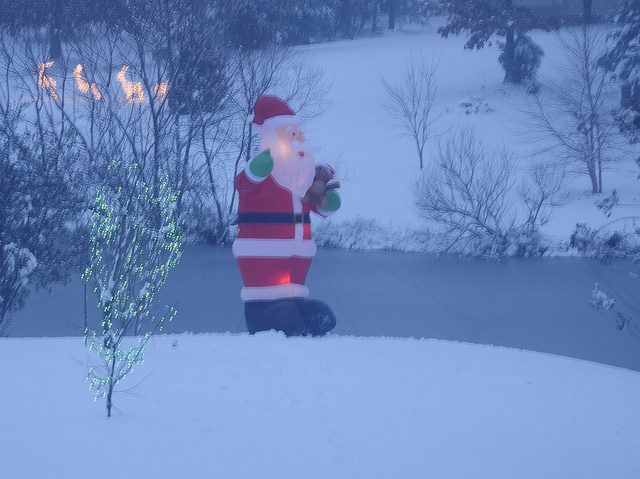 White Christmas images adorn the covers of countless Christmas cards and form the backdrop of many idealized Hollywood holiday flicks, but those dreaming of powdery flakes to grace the celebrations may have to settle for the vicarious experience of watching Bing Crosby sing about it as the real thing could prove elusive in some areas of the country. Turning the dream into reality depends in part on a person’s interpretation of what constitutes a “white Christmas.” By some reports the official definition calls for only an inch of snow on the ground but for many people, it is more a matter of the emotional satisfaction of seeing a significant amount of the white stuff piled up in their yards and on their porches. With Christmas only a week away, weather forecasters are already jockeying to decipher the weather patterns and divine which areas of the country will receive the picture perfect Christmas promised by all the marketers.

Statistically, more of the country is bare than snowy on Christmas day but the elusive dream lives on that somehow, this will be the year it happens for the millions who generally wake up to something other than a white winter playground on Christmas morning. Meteorologists debate whether the East Coast should prepare for driving rain or a major winter storm that could move in on Christmas Eve. Similarly, many predict that the weekend storms will not last through Christmas, replaced by rain that leaves the ground bare by the time it is time to open presents.

On the other hand, the Upper Midwest could receive a heavy load of snow and wind in Des Moines, Chicago, Detroit and Indianapolis. Parts of inland New England, the Ohio Valley and the Rockies may have at least enough snow on Christmas Day to meet the semi-official definition of white Christmas by the National Weather Service, possibly even up to a foot of snow. It does not have to actually snow on Christmas. As long as the accumulation is an inch or more, it counts. The odds of snow-covered yards in Buffalo, Burlington, Green Bay, Minneapolis and Syracuse on Christmas morning are about 75 percent based on current indications. Temperatures are expected to drop after the storm and keep the snow on the ground for a while.

The National Climatic Data Center (NCDC) reports a 90 percent or more probability that most of the western mountain region, Michigan’s Upper Peninsula, northern Minnesota and Wisconsin will receive snow, based on the historical data.  A storm consisting of heavy rain, snow and wind is developing in the lower Mississippi valley and expected to move northeast toward the Great Lakes as it strengthens. Some are saying that a person dead-set on snow for Christmas might consider the perfect record of Marquette, Mich. and International Falls, Minn. in having a white Christmas every year since they began keeping records.

The western U.S. will be a mixed bag with rain over the Rockies followed by fresh snow in time for a white Christmas in low elevation areas of Montana and Wyoming. Historically, and perhaps surprisingly, given the elevation, white Christmases are not the norm in Denver, although there have been exceptions and by some accounts the chances of winter wonderland for Christmas this year are an increasing possibility. Snow could stick in Salt Lake City, the Sierras and northern Nevada as well.

AccuWeather (AW) recommends that those in the storm regions who are traveling to find a white Christmas, leave on Monday or Tuesday before the full force of the storm could restrict travel and make it more dangerous to be out and about. The National Weather Service (NWS) is somewhat more cautious in its predictions but keeping its eye on a weather system headed to Buffalo that could carry both rain and snow. Meteorologist Steve Welch explains that it will be at least late Sunday or early Monday before they can get an accurate picture of what the elusive weather system is going to do. In the end though it will be the family memories made that make the holiday memorable whether the crystalline flakes arrive for a white Christmas or not.