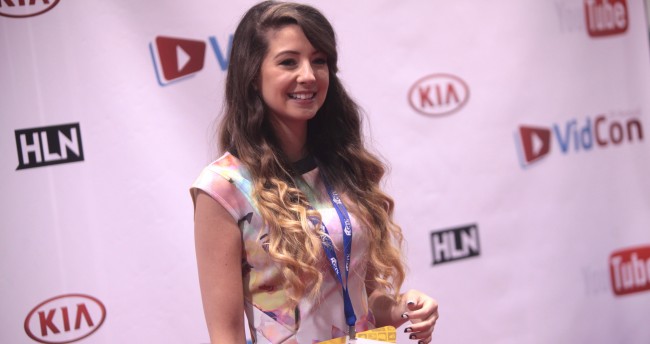 Zoe Sugg has reportedly quit the Internet after rumors surfaced that she used a ghostwriter for her new novel.  Sugg’s Girl Online has outsold debut novels of high-profile authors, including J.K. Rowling and Dan Brown, and is slated to be a Christmas best-seller.

The novel was surrounded in controversy over the weekend as people accused her of not writing it herself. Even her publisher, Penguin Random House, admitted that she had some help in writing it, however, the ideas, characters and story were all Sugg’s own. It seems like a strange accusation when so many other authors have had ghostwriters to help them do the writing stage of the work.

The 24-year-old vlogger, who goes by the name “Zoella” on YouTube, announced on Twitter that she was taking some time off from the Internet. She made it clear that it was just for a few days, saying it was because the Internet was “clouding up my brain.” Her boyfriend, Alfie Deyes, also a vlogger, announced via Twitter that he was taking a break, too. It seems the two have been so busy with their online lives that they need some personal time off, as they have not spent much time together due to their own projects.

The news of Sugg quitting the Internet comes after the rumors that her novel, Girl Online, was penned by a ghostwriter. Many fans worry that she is quitting because of these rumors, and that she is focusing too much on the negativity. One fan tweeted her to tell her to focus on the positives, such as the success of her debut novel.

Girl Online sold five times the amount that Fifty Shades of Grey did in its first week. It is a major success, and shows the possibilities of social media. The young author has over 12 million subscribers on her YouTube channel and 2.6 million followers on Twitter. It is likely that most of her fans helped her novel hit the top spot so quickly.

Sugg admitted that she had help in writing the novel. In her acknowledgements, she specifically mentioned two names. The first was that of an editor, but it was the second that started the rumors of ghostwriters. Siobhan Curham is a freelance writer and has written her own young adult novels. Many suggest that she was the ghostwriter of the debut novel, but she has not yet confirmed or denied those claims.

It should not be such a controversy. The characters and storyline are Sugg’s own – she just had help with the writing part. Not everyone has a talent for that part of the process. She is a vlogger and not a blogger. That means she uses video rather than the written word.

The 24-year-old is happy about the success of her novel. However, it seems that the negativity is taking its toll. Sugg is quitting the Internet for now, right after the rumors of her hiring a ghostwriter for her novel surfaced.

One Response to "Zoe Sugg Quits Internet After Ghostwriter Rumors"