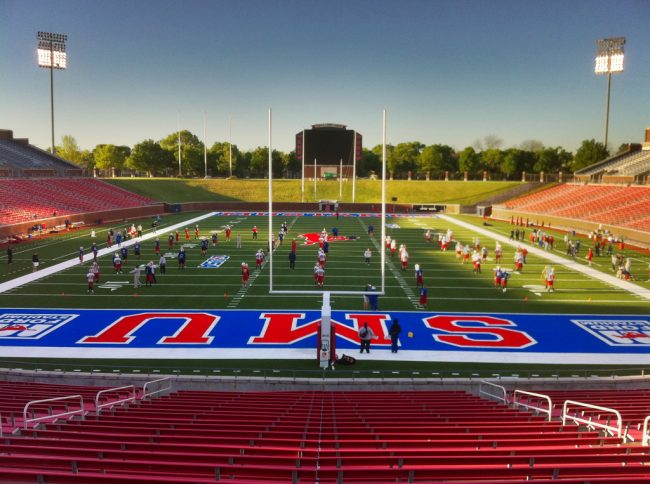 So, the wooden spoon winner for 2014 college football season is Coach June Jones.

The Quarterback Guru – Really! That June Jones who revamped Coach Mouse’s Run-and-Shoot offense and is widely considered as a quarterback guru. Well, when was the last time a great quarterback came from coach Jones’s system? The Peyton Mannings of the world, Aaron Rodgers of the world, those franchise quarterbacks in the NFL, anybody remember?

Alright, let’s reduce the bar considerably. How many Heisman trophy winning quarterbacks did June Jones produce? As a head football coach at Southern Methodist University in Dallas, Texas for the last six seasons coach Jones switched seven quarterbacks and none of them really succeeded. It is unfathomable that a so-called quarterback guru could not attract a Robert Griffin III or a Johnny Manziel or a Jamies Winston while being at the epicenter of high school football talent. He could not turn one of his hand picked quarterbacks into a pro calibre player either. Many football analysts say Texas is a high school football talent goldmine but, most of them fail to mention the appalling record of the June Jones run and shoot offense against quality power conference college football programs.

Recruiting – Everybody associated with the college game knows that recruiting is the single most important quotient for success. While coaching at SMU that has a storied history of championship football dating back to 1935, June Jones could not keep enough high school talent in Texas to play college football. As a matter of fact, SMU has the least number of players from the state of Texas than any other division one school in the state. Top high school coaches in the DFW area have raised eyebrows at the lack of attention given to their programs by June Jones in the past few years while, Alabama and other giant programs are behind their backs to recruit players. Actually, it is not a surprise to the SMU nation as coach Jones was rarely spotted on campus during his stay. Let’s not talk about those off-season Hawaii vacations.

We are talking about practice – No kidding, that was what June Jones whined when his Arizona State hire went bust after ASU’s boosters disapproved his hire. When asked, why he really wanted to leave SMU after taking the school to three straight bowl games, he complained that the school does not have an indoor practice facility and it is very hard to win without it. Then a year later, June Jones made one of most ludicrous statement in a strong field when he said to reluctant recruits of the 2012 class that he will stay for many years at SMU because he is running a Christian fellowship in DFW. One can figure what impression it gives to a recruit when a college head coach says his heart is in preaching theology and not in teaching football. High school footballers from the inter-cities want to hear more about gold not God. What recruits want from college is the skills and ability that would elevate them to play in the national football league on Sundays. It is universally acknowledged that religion and politics do not have a place in the fabric of sports and June Jones failed to understand that. Interestingly, the coach at the center of the infamous Allen Iverson practice rant, the great Larry Brown teaches basketball at SMU. Coach Brown is an epitome of turning around programs and he turned the SMU basketball program into national contender in just a couple of years with the same recruiting and academic rules that bothered June Jones.

A Quitter – Since taking over the SMU program in 2008 as a 1-11 football team, June Jones admirably took them to school record four bowl games. But, June’s SMU tenure will always be remembered for the ASU fiasco and for his lack of moral conviction and for the way he quit on the school and the players citing personal issues (A synonym for lack of confidence in the sporting world) abruptly two games into the season after the North Texas drubbing. SMU ended this football season with a 1-11 record as the lowest ranked team in FBS Football. As the highest paid non-BCS coach, June Jones failed to deliver at Southern Methodist University and shockingly many a college football pundit turned a blind eye on his career ending debacle over the past three seasons. So as quitters are losers, it is very fitting to say that coach June Jones is the worst college football coach in America. As they say it in Texas, that’s the bottom line.