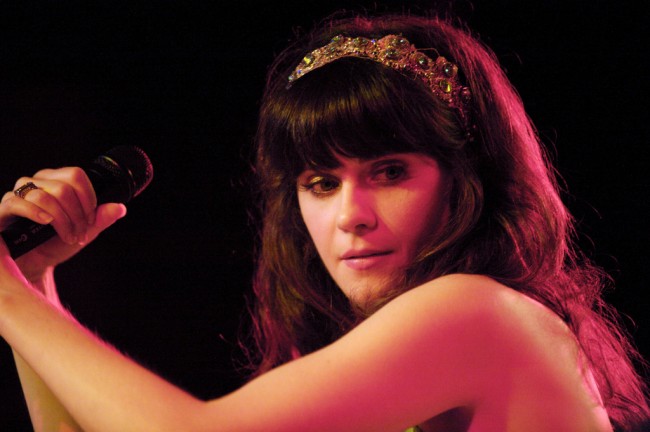 New Girl actress Zooey Deschanel confirmed that she is pregnant with her first child. She has been dating Jacob Pechenik, producer of Before Midnight and The Skeleton Twins, since last summer and says they are “both thrilled about the baby.” The Deschanel family is being double-blessed, as Zooey’s sister, Emily, announced last month that she is pregnant with her second child.

Deschanel has played the “adorkable” Jessica Day on the Fox series New Girl since 2011. Jess is a middle school teacher who moved into a loft in Los Angeles with three men: Nick, Schmidt and Winston. Although Jess got together briefly with Nick (played by Jake Johnson) during the show’s second season, the two were quickly broken up. Tonight’s episode, “Coming Out,” has Jess announcing her “official relationship with Ryan.” Damon Wayans Jr. also has a recurring role on the show as Coach. The show, developed by Elizabeth Meriwether, was originally titled Chicks & Dicks.

Deschanel has been nominated eight times for her role as Jess. Although she did not win either the Emmy or Golden Globe awards she has been nominated for, she did win the Critics’ Choice Television Award in 2012, tying with Amy Poehler for Best Actress in a Comedy Series.

New Girl is only one of her creative avenues. Since her first television role in 1998 on Veronica’s Closet with Kirstie Alley, and her first movie role the following year in Mumford, the actress has been working steadily. She has starred in films as diverse as Elf (with Will Farrell), Failure to Launch, the animated film Surf’s Up and The Hitchhiker’s Guide to the Galaxy. Experts consider her appearance as Anita Miller in Almost Famous, directed by Cameron Crowe in 2000, to be her breakout movie. She reportedly earned more than $9 million in 2012 alone. Deschanel’s net worth is estimated at $16 million. She makes $130,000 per episode in her New Girl role.

Born in Los Angeles in 1980, Deschanel has been around the entertainment business her entire life. She and big sister Emily often traveled with their father, director and cinematographer Caleb Deschanel. Although she sang in high school and has been recording albums since 2006, Deschanel is just now gaining more recognition for her music. She tours as part of the music duo She & Him with M. Ward. He plays guitar and does production, while she provides vocals and plays banjo, keyboards, percussion and ukulele. The group has released five albums, including their latest, titled Classics, in December 2014.

Before She & Him, Deschanel performed around Los Angeles with Samantha Shelton in a jazz cabaret act called If All the Stars Were Pretty Babies. Although a video surfaced on YouTube in 2007, that duo has long since broken up. She also performed a duet with Prince in FALLINLOVE2NITE, which he debuted on New Girl.

Although Zooey was previously married to Ben Gibbard in 2009, she and the lead singer of Death Cab for Cutie later divorced, citing “irreconcilable differences.” Deschanel and Jacob Pechenik have announced no plans to marry, and Fox has not yet announced whether they plan to write her pregnancy into New Girl.