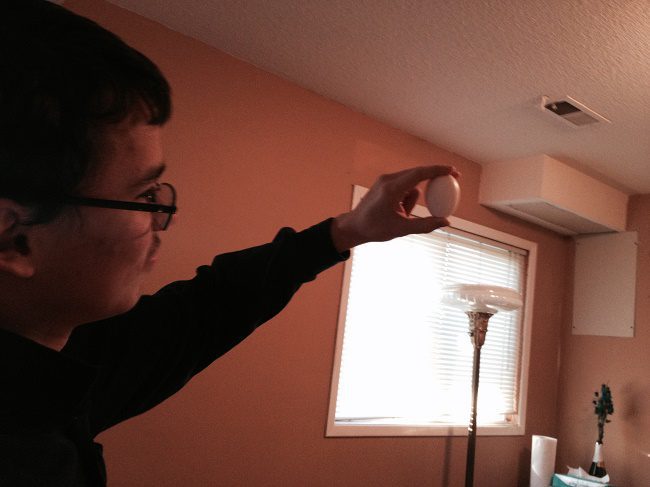 Egg dictionaries need an update to include the word, “unboil,” according to University of California at Irvine (UCI) scientists, who say their discovery could advance cancer treatments as well as offering implications for beneficial uses in food production and biotechnology. Long considered an irreversible chemical change, the researchers found a way to untangle the protein structure of boiled egg whites and refold them into their natural structure allowing the cooked egg to return to its liquid form. Unlike other time consuming protein unfolding techniques, this new method takes only minutes making it a more feasible solution for cancer research and other valuable human applications.

UCI chemists worked in cooperation with Australia’s Flinders University scientists to develop a way to reverse the chemical changes in a boiled egg. Using eggs boiled for 20 minutes at 194 degrees Fahrenheit (90 degrees Celsius), they start by liquefying the rubbery egg whites with urea to rebuild the lysozyme. Then, they put the substance through a high-powered vortex fluid machine where the shearing forces on the tiny pieces pressure them into untangling and returning to their original unboiled state. The study appeared in the ChemBioChem journal online on Jan. 23., 2015 and has been accepted for the upcoming print journal publication.

The streamlined protein unfolding process could revolutionize protein production for industrial and research uses, the researchers explain. This would allow pharmaceutical companies to grow cancer antibodies in common, less expensive proteins rather than the costly hamster ovary cells currently used, dropping the price tag on cancer treatments and making them more affordable. Recombinant protein users such as cheese makers and farmers could also benefit from the reduced time and cost of manufacturing the proteins made possible with the unboiling process.

As strange as it may sound, UCI chemistry and molecular biology professor Gregory Weiss confirms that it is true that their scientific team has discovered an unboiling method for hens’ eggs. Previous efforts to advance the cause of creating an efficient method of producing usable molecular proteins has had limited success. The time and expense of the four day process required to unfold and refold the proteins by other methods, along with the proteins’ tendency to “misfold” and become useless has hampered any significant advances in useful applications. The point of the current experiment was not so much in reconstituting boiled eggs as in figuring out how to recover other gummy proteins needed for cancer treatments and biotechnology, rather than wasting time scraping them off test tubes. Weiss says their method speeds up the process to a matter of minutes making it much more feasible to carry out on a large scale basis.

UCI’s patent on the newly discovered process is pending but the university’s Office of Technology Alliances is already talking to potential commercial allies and backers to keep the work going as the potential to advance cancer treatment is just too potent to ignore and one that Weiss is eager to develop. The scientists want to study the process of unboiling eggs further to discover if they can apply it to the antibody proteins used in one cancer therapy to adhere to cancer cells, allowing the immune system to do its job in destroying the foreign invaders. The current cost of producing this therapy is prohibitive for many patients so Weiss is hoping the new process demonstrated by unboiling eggs will make cancer remedies much more affordable and therefore more available to a wider array of patients.

University of California at Irvine

Image courtesy of the writer