By Chanel van der Woodsen on January 31, 2015No Comment 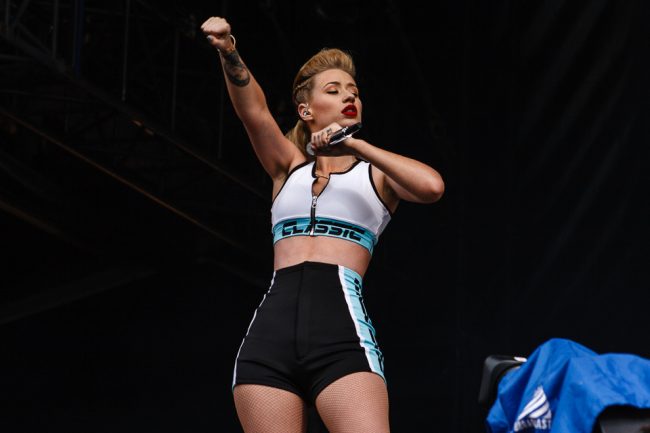 T.I. Harris absolutely does not approve of Iggy Azalea’s latest Twitter meltdown, and says that she needs to get a better handle on how she expresses her beef with people in order to not allow it to spiral out of control and become some big public drama. The hip hop mogul was filmed coming out of Beverly Hills hot spot Crustacean last night, and he did not exactly have many kind words to say about the rapper in terms of her recent behavior.

Harris says that the 24-year-old should lay off the constant social media rants and stick to what she is being paid to do; make music for her fans, and not run around causing trouble at every turn. While he respects her right to have issues with certain people based on situations they may or may not have wronged her in that she is upset regarding, he feels that Azalea is going about dealing with these circumstances all wrong. Instead of blowing up on Twitter and attacking those who she has a problem with, Harris says, she should either approach the situation rationally or simply deflect it entirely in order to be the bigger person and move on.

The feud in question that Harris is referring to went down with shoe mogul Steve Madden, whom Azalea recently targeted on Twitter over her disapproval with some modelling pictures he released that she in no way approved of. She blasted the photographs by calling them both god-awful and gross, and expressing her extreme discontent with what she felt was not being included in a process that she was supposed to be 50 percent of in the first place. The Mullumbimby native apologized for her words shortly following the uploading of said rant, which she almost instantly deleted but had already been seen but hundreds of social media users and spread around the internet for discussion. The Tumblr page on which the photographs were displayed as likewise been taken down since the social media incident occurred.

Madden himself has issued a statement regarding Azalea’s behavior, which he says he is most certainly less than impressed by. He compared her meltdown to a temper tantrum, and labelled it as “disgraceful”. However, he said that he is in no way cutting off ties with her regardless of the fact that she hurt his feelings and acted in a way that he deems as entirely inappropriate and flat-out unnecessary. The 57-year-old went on to say that when two artists work together, there are almost bound to be fireworks or some kind of turmoil between them given that they both have different views of how things should be done and the manner in which a project should be completed.

It remains to be seen whether Iggy Azalea will take her manager T.I. Harris’s advice to stop using social media to wage wars on other individuals, and approach the situation in a different manner in order to better prevent conflict from escalating. She has not yet responded to the mogul’s comments regarding his feelings surrounding her recent battle with Steve Madden.