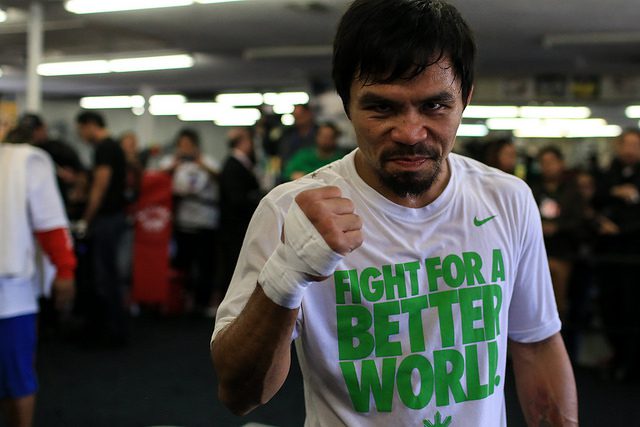 Manny Pacquiao visited Prince Harry at Buckingham Palace last week and was humbled to be with the royals. Pacquiao presented Prince Harry with a pair of boxing gloves with his signature and talked about his next bout which, if not with Floyd Mayweather, could be with Amir Khan.

Pacman, as fondly called by his countrymen, is in talks for his fight this year, which has Mayweather as opponent on top of the list. However, negotiations are still ongoing and his team give themselves until this month to consider the second priority. Forbes listed Pacquiao last year as the world’s top 11 highest paid athlete.

It is known that the 30-year old younger son of Prince Charles and the late Princess of Wales, Diana, is a fan of sports and has invited one of his favorites to the royal family’s home. Pacquiao, who also serves as a congressman in his hometown, has admiration for the monarchy. He named one of his daughters after Queen Elizabeth.

The Pacquiao couple and his team were reportedly invited to dine with Prince Harry before being toured in the palace. It was said before their meeting that Pacquiao and the Prince would also talk about charitable interests.

His Instagram account shows him thanking God for the “nice” dinner with the Prince. With the signed gloves bearing the pattern of the Philippine flag which he gave to Prince Harry, was another picture that says he had a great experience. The iconic boxer is grateful to the Prince for being so nice.

Traveling with Pacquiao and wife Jinkee to London are Pacman’s adviser Michael Konz, former governor in the Philippines Chavit Singson and several others. Manny Pacquaio and his team visited Prince Harry at Buckingham Palace on Thursday and met him again on Friday morning in a shorter meeting.

Koncz told Yahoo Sports on Friday that he would meet with the team of Amir Khan, an English professional boxer, for a potential fight with Pacquiao later this year. They will meet at London’s Fitzroy Lodge Amateur Boxing Club. Hence, Khan can be the next opponent if it is not Floyd Mayweather, Jr.

Koncz said this does not mean they are closing the door for Mayweather, but they are not sitting around and just wait either. They are just making alternative plans and Khan is a possibility. They can have either Abu Dhabi, London or even the U.S. for the fight venue.

Executive Vice President and General Manager Stephen Espinoza of Showtime Sports said Mayweather is still the first choice for Pacquiao’s May 2 fight and both parties are working hard to make it happen. Yet, the talks have not been finalized yet.

While Manny Pacquaio visits Prince Harry at Buckingham Palace, Mayweather watches LA Clippers play and hearing chants from people that they want Pacquaio. The Filipino world boxing superstar feels truly happy for the great experience in the British royal palace. The much-awaited Pacquiao – Mayweather Jr. bout will be the biggest in boxing, and in the history of sports. Needless to say, Pacquaio’s side already have their Plan B after January 31 if Mayweather Jr. and company will still be undecided.