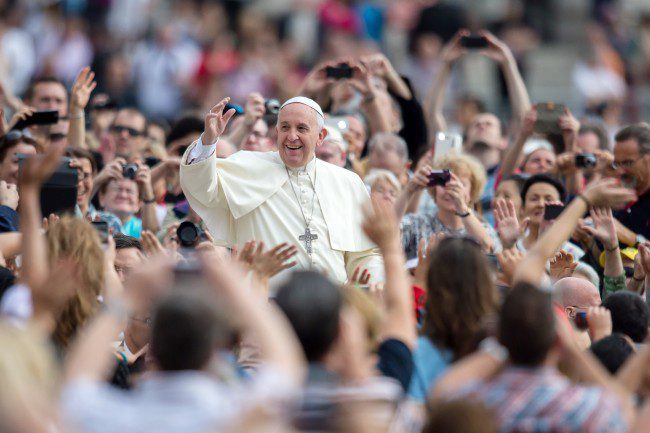 Pope Francis put feet to his faith today, demonstrating the biblical admonition that it is “more blessed to give than to receive” by raffling off several personal gifts to give compassion for the poor a personal touch. The pontiff has built a reputation for concern for the poor since taking over the reins at the Vatican in 2013. Dignitaries from around the world and faithful congregants have showered Pope Francis with valuable gifts and although he appreciates the thoughts and good wishes, he feels strongly that the money would be better used to help those in need.

The featured attractions in the raffle are a brand new, white, and fully-equipped Fiat Panda 4×4; three single rider bikes; a tandem bike; a digital camera; a Panama hat; a silver picture frame; a coffee maker; an espresso machine; a camcorder; wi-fi dock; a leather suitcase; watches; shoes; belts; and wallets. Thirty unidentified “consolation prizes” will also be available for raffle. Not included in the compassion raffle are the white 1984 Renault 4 “popemobile” nor the Ford Focus normally used by Pope Francis. He will also keep any monogrammed items, some vegetable seeds from U.S. President Obama and some honey and whiskey gifted to him by Queen Elizabeth of England. The original givers of the gifts are not specified, but the modest ways for which the Holy Father is known make it fitting that he should pay forward the kindnesses to him so that those less fortunate may feel the personal touch of blessing as well.

Posters appeared around the Vatican in November, announcing the coming raffle and its intention to raise money to aid the poor and needy. The raffle tickets were available at the Vatican museum, pharmacy and post offices in person – no mail-in or online orders allowed.  They sold for 10 euros or about $12 each at current exchange rates with all proceeds designated to help the Catholic Church in their long-standing efforts to combat poverty through their many social programs. It is an issue near and dear to Pope Francis’ heart, so this is not his first act of kindness toward the less fortunate. Upon receiving 400 sleeping bags for his birthday, he arranged for them to be distributed to Rome’s neediest population.

The personal touch of a chance to own an item that once belonged to Pope Francis, the compassionate leader of the Roman Catholic Church worldwide, is an opportunity many in the vicinity of the Vatican are happy to take part in, though exact numbers on ticket sales are unavailable. Winners will be announced on the Vatican website. Forbes declared that the Pope is one of the most influential and powerful people in the world. Words such as morality, integrity, simplicity, love and compassion for the downtrodden are readily associated with the pontiff. He has not hesitated to be seen as a servant to prisoners, the homeless and the sick; extending a welcoming and healing touch that inspires countless people around the world with his words and his faith in action, showing that Pope Francis takes his responsibility to model the love of Christ for believers everywhere seriously.