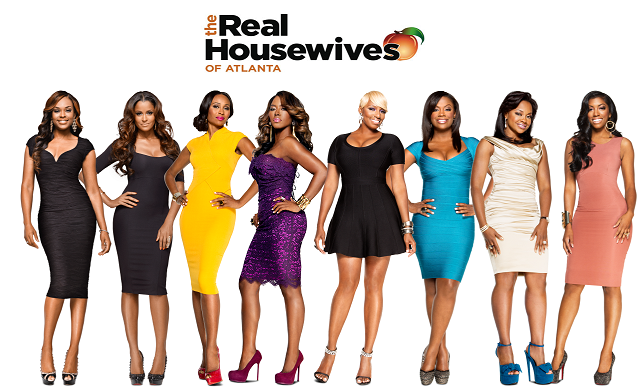 The drama between the Real Housewives of Atlanta co-stars NeNe Leakes and Kenya Moore continues to brew. These ladies have been feuding on and off for a couple of seasons. On Tuesday, Kenya posted a legal document that she received from NeNe which takes the fight to the next level.

The photo Kenya posted to Instagram revealed a typed document which contained the heading, “DEMAND TO CEASE AND DESIST DEFAMATORY STATEMENTS.” The document stated Mrs. Leakes learned that Kenya had engaged in making false, defamatory and destructive statements. It went on to state Ms. Moore had made statements directly by innuendo and implication through the BravoTV blog, social media and during television broadcasts.  It added:

You are hereby directed to cease and desist making any and all false and defamatory statements, which are injurious to her character and reputation.

The documentation accused the Celebrity Apprentice contestant of making malicious and false statements on BravoTV with the intent to damage NeNe’s reputation. Kenya was charged with exposing her co-star to ridicule, contempt and public hatred while injuring her in her profession and/or trade. Although Kenya did not seem moved by the document, it continued with the following:

Particularly, your statement was made with the intent to directly injure and defame Mrs. Leakes and the perception of her on ‘The Real Housewives of Atlanta’, her brand as a member of the cast, and her brand in the entertainment and celebrity industry in general. 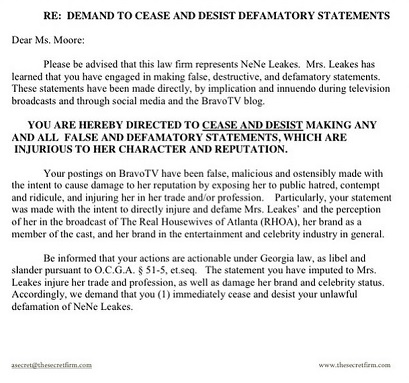 Kenya said this must be NeNe’s way of telling her “Happy Birthday” since she celebrated her 44th birthday on January 24. The reality star’s 47-year-old accuser did not respond directly to the post from her co-star but later tweeted “The Thirst Is Real!” and added:

They need me for press because they cannot get none.

Both ladies have been victims and initiators of much of the show’s drama. The New Normal actress is the longest running star of the Atlanta Housewives franchise and has been a part of the cast since its inception. Each of these celebrity personalities has their own set of fans that are not afraid to speak out. One of Kenya’s fans stated:

I think NeNe is rude and plays very dirty. I do not like NeNe’s presentation to new comers on the show. It is exactly what we all see with our own eyes. She is a very ghetto and trashy grown woman.

Another fan of Kenya wrote:

Kenya is more real and definitely smarter than NeNe. NeNe wants people to believe she is real, but she really isn’t and cannot hide her lack of education and jealousy of Kenya.

NeNe has a host of fans as well. Regardless how rude the celebrity is many of her fans have remained loyal to their queen. One such fan stated:

I love it!!!!! NeNe is not playing, every time she turns around Kenya and her cronies are saying all sorts of malicious vile things about her, they are consumed with envy because NeNe is steady building a successful career and making a lot of money and continues to be the fan favorite. That just blows Kenya’s mind. Win NeNe Win!!! Trust Kenya will stop with the lies and slander about NeNe!!!

Please DO NOT leave the show. You have many, many, many fans and if nothing else, you come across as real. Kenya is a messy liar. Heck, the woman lied to Bravo to get cast on the show. She lies as easily as most people breathe. Kenya has no man, no children, no nothing, just a lying tongue and an annoying voice that grates on the viewers ears. Do not leave a show that you truly help start to: lying Kenya, wannabe Claudia and downright boring Cynthia. You are the queen of RHOA. Don’t let these women who came on because of being financially broke and lacking career opportunities cause you to leave your throne.

While both of these women may have many supporters they have consistently been seen in a negative light on the show. NeNe has long been known as one with a nasty attitude and bullying tendencies. Kenya has been seen as a constant instigator and initially tried hard to be NeNe’s friend but recently decided it was no longer worth the effort. The ladies have been at war with each other for the last couple of seasons and it seems the drama has just taken a turn for the worse.  In a strange twist of events NeNe Leakes had her RHOA co-star Kenya Moore served with legal documentation.