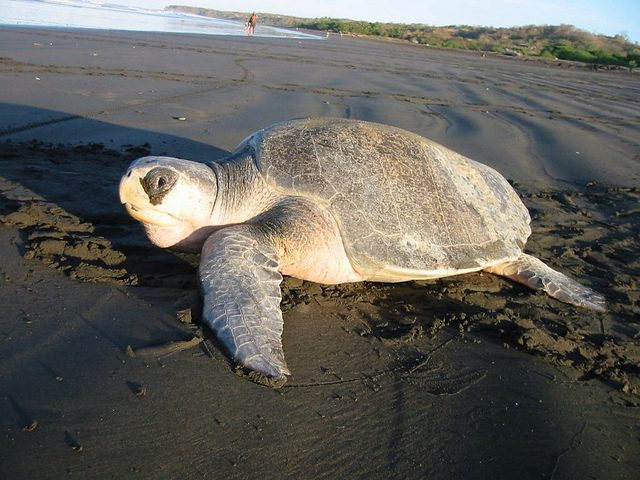 Sea turtles have a new icon, an olive ridley turtle, dubbed “Solstice,” currently recovering at the Oregon Coast Aquarium (OCA) in Newport, Or. Found stranded on the Long Beach Peninsula on the winter solstice, hence her name, she was dehydrated and hypothermic after presumably being swept by storm currents from the warm waters of her natural habitat to the chilly waters of the Pacific Northwest coast. She is making a remarkable comeback and officials hope to release her back to the wild after several months of rehabilitation.

The Seaside Aquarium carried out the rescue but transferred her to the Oregon facility where the larger staff is better equipped and more experienced at providing the specialized care that she needs to recover. Her body temperature had fallen to 60 degrees when Samantha Milner of Ocean Park, Wa. and her boyfriend discovered the stranded sea turtle while beach combing after a storm. Normal body temperature for sea turtles is 75 degrees.

The pair suspected she may be an endangered species. Aquarium officials confirmed that olive ridley sea turtles, while more populous than green or leatherback turtles, are in fact threatened and some subspecies endangered. They emphasize that her survival and rehabilitation is critical to the continuance of the species given her reproductive potential as a relatively young female.

Olive ridley turtles tend to be smaller than other sea turtles at an average size of two to 2.5 feet in length and 80 to 110 pounds in weigh for a fully grown adult. Solstice measures 42 inches and 41.5 pounds and is considered a “sub-adult.” The characteristic olive colored heart-shaped shells give the species its name. They typically live about 50 years in the wild.

The typical range for olive ridley turtles is in the tropical seas along the southern coast of California and South America, but marine enthusiasts can spot them in the warmer regions of the Pacific, Atlantic and Indian Oceans. Each year some sea turtles get caught up in a current that carries them further north, causing hypothermia from the unaccustomed colder waters, according to OCA spokesperson, Erin Paxton. The sea turtles take quite a battering from the stormy waves and arrive much the worse for the wear. Many do not make it out alive and finding one usually means others are nearby or on their way. A dead sea turtle was found near Fort Stevens on Christmas Eve with another showing up on Dec. 29. Marine biologists expect more.

Solstice’s care team at the aquarium has conducted tests and found no signs of infection, declaring her to be stronger than most sea turtles they have rescued in the area. Her rehab plan includes hydration baths and fluids to combat the dehydration, practice swims and a gradual restoration of her normal body temperature. So far she has gained 12 degrees while in the OCA’s care and Paxton reports that she is a “very special patient.”

Aquarium officials have high hopes that Solstice will make a full recovery after several months of treatment and rehabilitation at the Oregon aquarium. If her health continues to improve and federal authorities at the U.S. Fish and Wildlife Service (USFWS) approve her release back to the wild, the aquarium would transport her to her native warmer southern waters before attempting to let her rejoin the wild sea turtle population.

One Response to "Sea Turtle Recovering at Oregon Aquarium"