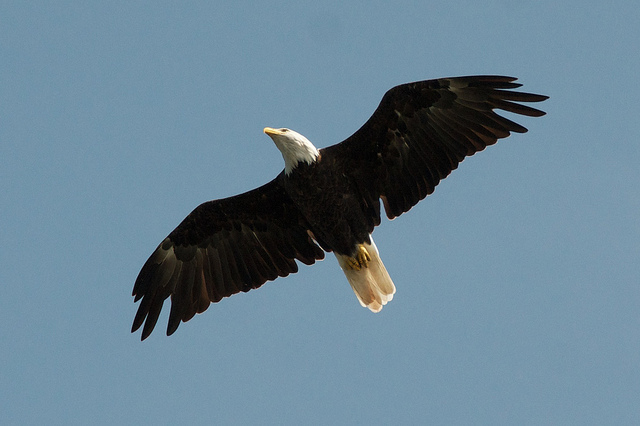 A bald eagle resurgence in population has been impressive since they were  placed on the endangered species list in late 2007.  In fact, bald eagle nests in Nebraska’s Cornhusker State broke a record for active nests. Game commissioners and partners in Nebraska Game and Parks Commission noted that out of 146 bald eagle nest inspected, 111 actively housed the great symbol of the United States.

The bald eagle has had a precipitous rise back to the top of the thriving species list. In the 1980s when other states were all about writing a federal plan to save the eagle, Nebraska had already set up a breeding pair. This pairing resulted in the first active breeding nest in a century, 11 years subsequent. Sixteen years hence, a bald eagle resurgence was complete with the species removed from the engaged list due to an outstanding 54 active nests. As of 2014, the number stands at 111 and should continue to break records in Nebraska.

This number is striking, considering the slow rate of propagation among bald eagles. Comparing birds of a feather, it takes three months for parent pairs to nurture its bald eagle baby to maturity, or at least until that they can spread their wings and fly the coop. This results in at least three eggs per year and 1.8 eventual hatched bald eagle birds. Other birds such as the dove lay several bunches of eggs, up to three times per year. They lay two eggs at a time, incubating only if they know both eggs will hatch at the same time. This will result in about triple the bald eagle’s numbers.

If a nest is disturbed because it is blown out of a tree due to a wind or thunderstorm, a bald eagle will not return to it. To this end, on both the east and west coasts, one variable must be exist. Although man may have been  instrumental in the decline of the bald eagle, they are making great strides to help in it resurgence.

In Nebraska, when the nesting season approaches, U.S. Fish and Wildlife Service along with the National Parks Service and the Platte River Recovery will stand guard and monitor bald eagle nests, making sure that the eggs remain undisturbed, possibly making way for another record-breaking year for active nests in Nebraska parks. New Jersey will also do their part to make sure that the number of bald eagles remains high. The Endangered and Nongame Wild Species program will also watch over the bald eagles nest, ensuring they do well during their nesting season.

However, New Jersey is more densely populated, which increases its risks. Some potential threats include people wanting to get too close to the majestic bird. They do not know that it just might change their behavior and threaten the young in their nests. A bald eagle resurgence can return America’s only native bird to its natural habitat, if humans will respect the great symbol of our country.