Jimmy Fallon on the Road With Will Smith and Rosamund Pike 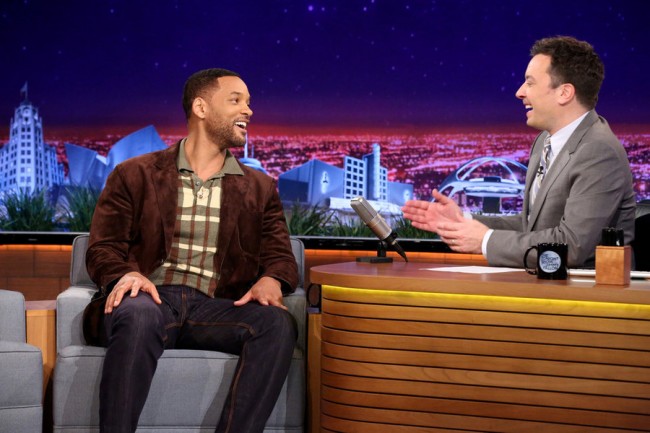 On The Tonight Show Starring Jimmy Fallon this Thursday evening, Fallon was still on the road with the Tonight Show in beautiful Los Angeles, California, with his guests, Albert Brooks, Will Smith, and actress Rosamund Pike from Gone Girl. The Tonight Show‘s musical guest was Jack White. During the episode, Hashtag the Panda had a Dance-Off against the USC mascot and the UCLA mascot.

Jimmy Fallon began the Tonight Show by joking about topics from the headlines of today in his monologue. For instance, he said he read about seven prominent Republicans who will be going to Iowa to discuss farming issues. “Chris Christie won’t be there,” Fallon said, “because the last time he was on a farm, someone tried to milk him.’ He cracked jokes about people who use emojis a lot having “better sex lives,” and also he made jokes about the recent outbreaks of measles around the United States. 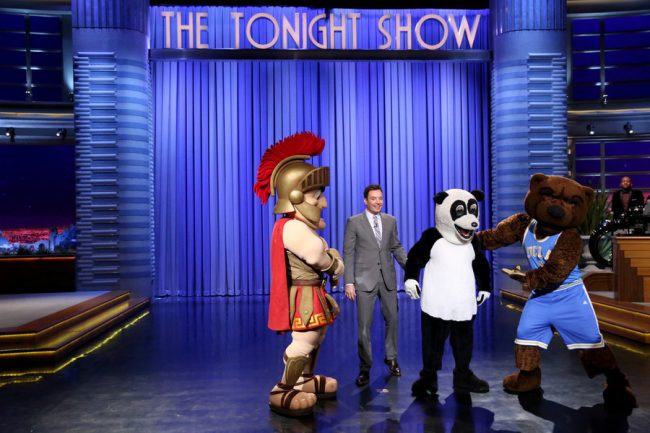 Then, Jimmy Fallon announced the Dance-Off between the USC and UCLA mascots. The USC Trojan mascot seemed to be the better of the two. Hashtag the Panda came onstage next, and they all danced to the Hashtag the Panda theme song. Doing that particular dance, at any rate, Hashtag outshone both of his competitors.

Fallon said he would have on Will Smith, who stars in the upcoming movie Focus, on the show tonight and actress Rosamund Pike from Gone Girl. Jack White would be the musical guest. 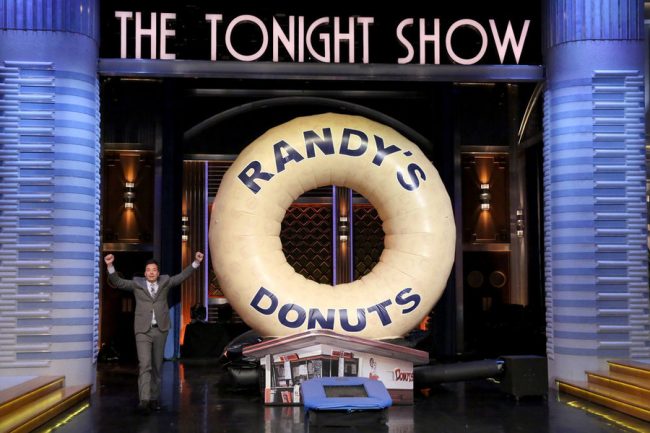 Jimmy Fallon said that one of his dreams was to jump through the Randy’s Donut sign, shaped like a donut. He had it behind the curtains, and ran and jumped right through the middle of it. Then, the Tonight Show went to a commercial break. 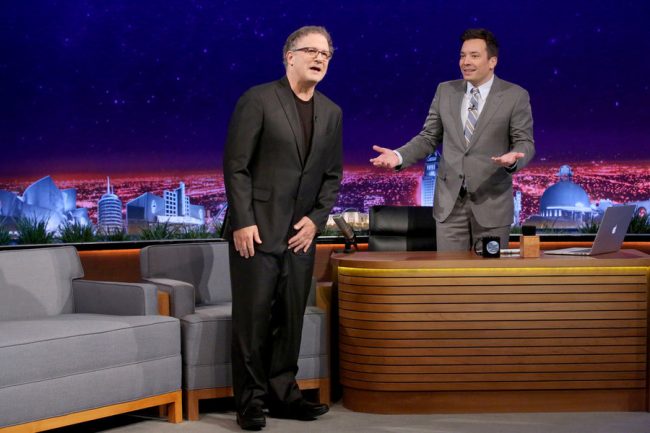 When the Tonight Show returned, actor Albert Brooks came out and surprised Jimmy Fallon. “This May, when you retire, it will leave a hole in television,” he said.

“I’m not retiring — Letterman is retiring.” Albert cursed and said to save money, he had hired someone from India to be his assistant. Apparently, his assistant had gotten the information wrong.

Jimmy Fallon wrote his weekly “Thank You Notes” tonight, instead of on Friday. “Thank you, Mitt Romney, for saying you’re not going to run. Or, as the Seahawks say, ‘That’s our thing.'” “Thank you, pineapples, for looking like palm trees on The Biggest Loser.” “Thank you, paparazzi, for not bothering me when I’m in L.A. I mean, you know I’m here, right?” “Thank you, Pringles, for being the horse saddles of the food world.” “Thank you, Los Angeles, for welcoming me back to L.A. this week. It was a short stay, but like all things, I’m sure there will be a sequel.”

The Tonight Show came back from another commercial break and Jimmy Fallon introduced his first official guest of the show, Will Smith. Fallon said that Will Smith was the very first guest he had on the show a year ago. The audience gave Will a standing ovation when he came onstage and took a seat.

“Where should I go eat?” Fallon asked him.

“You should go to my house,” Smith answered.

“What do you have?” Jimmy asked.

“You have two girls now, right?” Smith asked Fallon. Jimmy told him “yes,” and Will told him one of his daughters was 14. He said “You lose all respect when you have the hiccups.” Will told him that “boys were easier than girls.”

Will Smith told Fallon that “I play a con man,” in the movie Focus. He said “It’s about a guy who lies and steals and cheats and then falls in love and those things don’t blend well together.” He showed a clip from the movie. It looked like it should be a pretty cool and funny flick.

After a commercial break, Jimmy Fallon told Will that they had done a “shot-for-shot intro to the Tonight Show from the Fresh Prince.” That was on Monday, and it was AMAZING! Jimmy Fallon said they both had a lot in common, like both of them liked rap music. Jimmy Fallon got out his Looper and he and Will Smith did parts of a song together.

First, they laid down repeating instrumental sorts of sounds with their mouths, then Jimmy added some yells like “Whoo!” Will Smith then began singing a rap song, and Jimmy Fallon joined in. They both stood up and began dancing. The audience sang parts of the song back to Will and Fallon. It was an uber INCREDIBLE performance! 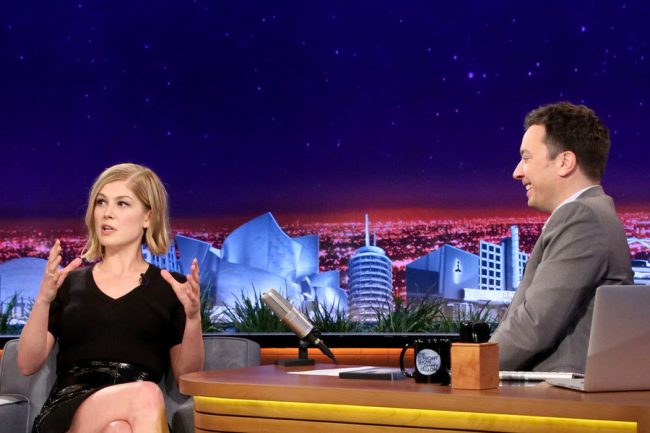 After another commercial break, Jimmy Fallon introduced his second guest of the show, actress Rosamund Pike from Gone Girl. Fallon said the movie has grossed over $355 million worldwide.

“Welcome back and congratulations for the Oscar nomination for Gone Girl!” Fallon told her.

Rosamund said that she has two boys. The news that she had been nominated came as a total surprise to her. One of her son’s cars, an electric toy, was becoming entangled in her hair as she was on the phone being interviewed. She said that the Critics Choice awards show was later that night. The only thing she could do was cut the car out of her hair. She brought it to the show, and it had the warning on a sticker on the bottom of the car to keep it away from hair.

Rosamund and Jimmy Fallon talked about a “physically intensive,” scene that she had with actor Neil Patrick Harris. She mentioned she found a Dora the Explorer doll, but it was not really the right size. Still, she mentioned that she did “highly inappropriate things with this Dora the Explorer doll.” Fallon then showed a clip from Gone Girl starring Ben Affleck and Rosamund Pike. It is a very intense, psychologically suspenseful movie. 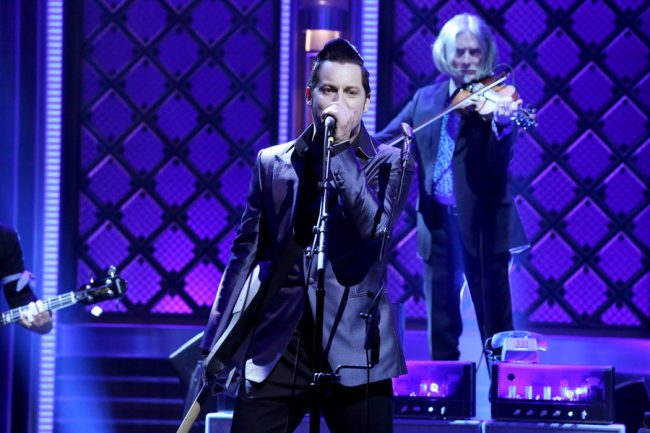 Close to the end of the Tonight Show, Jimmy Fallon introduced his musical guest, the amazing guitar player and singer, Jack White. He has been nominated over 20 times for Grammy awards. White sang a song from his album Lazaretto, called Freedom at 21. He ROCKED OUT, big time, and the audience cheered and applauded wildly when he finished singing.

The Tonight Show Starring Jimmy Fallon was excellent this Thursday, as Fallon closed out his time on the road in Los Angeles. His guests were actor Will Smith and actress Rosamund Pike, and rocker Jack White tore the place up with his amazing singing and guitar playing. Also, seeing the Dance-Off between Hashtag the Panda and the UCA and UCLA mascots was cool, and Fallon’s “Thank You Notes” segment was great, as usual.